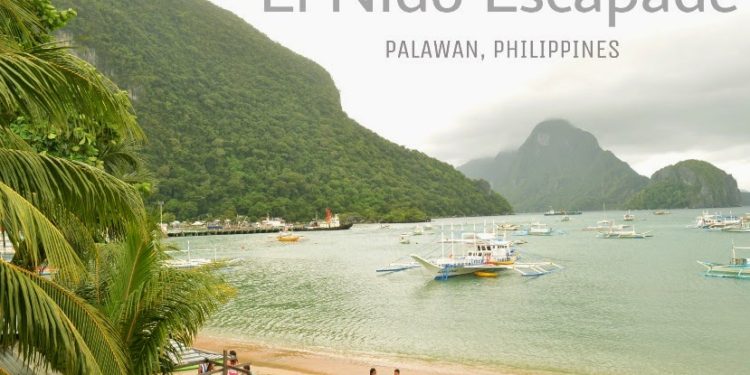 Serene surroundings, clear waters, limestone formations, secret beaches, and lagoons… it’s all that I hear from travelers who had been in El Nido, Palawan.

So when I got the chance, I decided to go on a vacation to this paradise. I was a little disheartened when I arrived though because of the bad weather. A typhoon traveled with us and the coast guard didn’t allow anyone to go to other islands and secret beaches.

On a lighter note, we were still able to experience the beauty of El Nido. I think one of the best things you will appreciate in El Nido is that you will certainly feel you’re in Paradise after you engage yourself in a stressful ride in going there. It’s like the oasis you finally see after hours of walking in the desert.

On our way to El Nido

It would take 6-7 hours to travel to El Nido from Puerto Princesa City. Months before the trip, my travel companions and I decided that we would ride a bus going to El Nido since it’s much cheaper. However, after we arrived in Puerto Princesa, our tour guide in going to the Underground River told us that it would be better to ride on a private van since it’s only Php 200 more and so our journey would be more comfortable. Also, the van will fetch us directly from where we’re staying. Hence, we rode a private van. There were only 9 of us in the van so it was really comfortable.

The first 4 hours was almost fine. There are no road signs for all blind curves and zigzag roads and no lamp lights but there was a concrete road and it wasn’t rocky. So as I’ve said, it was almost fine. However, the last two hours is tremendously stressful. You’ll have to endure two hours of a bumpy ride because there were no proper roads yet. Plus it was raining hard that day due to Typhoon Quedan so not only did we have to endure the bumpy ride, our driver also had to be careful because the roads are slippery. In fact, when we arrived in El Nido, our van, which was pearly white before the trip was mud-spattered and already looked like cow shit.

Finally, we were dropped off at the terminal where tricycles lined up to take us to El Nido town proper.

We didn’t book anything before we arrived there so actually we had to wander around the town to find a nice place to stay. Note: There are many lodging houses, hostels or pension houses once you arrive in the town proper. You just have to find the best place with the best deal. At first, we checked in at IBR because it was the first place we saw that is somehow affordable and clean. However, after 20 minutes of walking around, we decided to check out and transfer to Casa Buenavista (even though it was more expensive) because it’s located on the beachfront.

The best thing about Casa Buenavista is that it is located at the end of Rizal Street and just in front of the beach. The view is certainly amazing. It’s also near the restaurants and stores so it’s pretty accessible. I think the only thing that I didn’t like was the color of the rooms. It looked like a hospital room. Haha. I would rate my stay there as ★★★★✰.

We went on for Tour A since it’s one of the best tour sets apart from Tour C. We would have wanted to have both but since there was a typhoon, some of its destinations were prohibited. These are the destinations included in Tour A: Small Lagoon, Big Lagoon, Shimizu Island, Secret Lagoon and 7 Commando. Among all these 6 destinations, we were not able to go to Secret lagoon because of strong waves and high tide. Entering the small rock hole to get inside the Secret Beach would be impossible if you don’t know how to dive. I was really hoping we would be able to go there. Note to self: don’t ever go back there on ‘ber months.

NOTE: You really should bring a plastic case for your camera if you don’t have a waterproof one. You will certainly get wet even before you reach the destination because of the waves. Good thing we had a plastic case for the iPhone so we were able to take lots of pictures.

Also, the price includes lunch. It was one of the most appetizing meals I’ve ever had although it wasn’t enough to suffice our hunger. Haha. You should bring snacks along with you in case you get hungry and you’re still far away from El Nido town.

Despite the long and stressful drive, El Nido is truly a magnificent place that one must go to. With its unspoiled waters and islands along with the breathtaking views and locals, going there is certainly worth it.