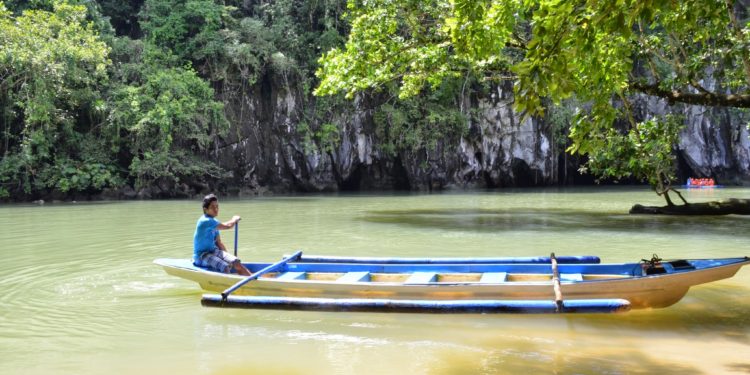 I’d say this was really the heart of our trip to Puerto Princesa. After all, the Puerto Princesa Subterranean River National Park is one of the New 7 Wonders of Nature. And it’s not every day you can go to a place that was inscribed by UNESCO as a World Heritage Site, right?

The travel to Sabang from Puerto Princesa is approximately one hour. We arrived at a mini-port with boats that will bring us to the Underground River.

There were also lots of monkeys in the area. They were not caged and they walk freely like everybody else. They even entertained some tourists. However, our guide told us not to touch them since they are wild monkeys and they might strangle us to death.

Also, we were told to be on guard with our bags since monkey’s there are known to be the smartest and fastest pickpockets. Actually, when we arrived at Palawan, our driver told us that Palawan has a zero crime rate. There wasn’t even police on guard in any corner we went to. However, there are many cases of theft committed by monkeys.:P There’s no law that can imprison a monkey if they steal your belongings so just be cautious with your stuff anyway.

There were a lot of tourists that day so we had to wait for like hours before we were able to enter the river. So we took our time taking pictures.

So after seems like forever, our group was escorted to our boat so we can finally enter the underground river.

Some of the things I noticed in the underground river:

The Pegasus stalagmite, named after the mythical winged creature in Greek mythology.

Rock formation named Candle. It is one of the largest and tallest stalagmites in the Puerto Princesa Underground River.

After 40 minutes, we reached the end of the publicly allowable and navigable length of the underground river and made a U-turn. Going beyond requires a special permit from the government. You need to be a geologist, biologist, researcher, etc. to go further.

After the tour, we had our lunch at a nearby resort before we headed back to Puerto Princesa City.

Visiting the Puerto Princesa Subterranean River experience was a mind-blowing experience. I’m glad I made the decision to visit this natural wonder in Palawan.