Palawan Massacre Monument: A Grim History of the American Prisoners of War 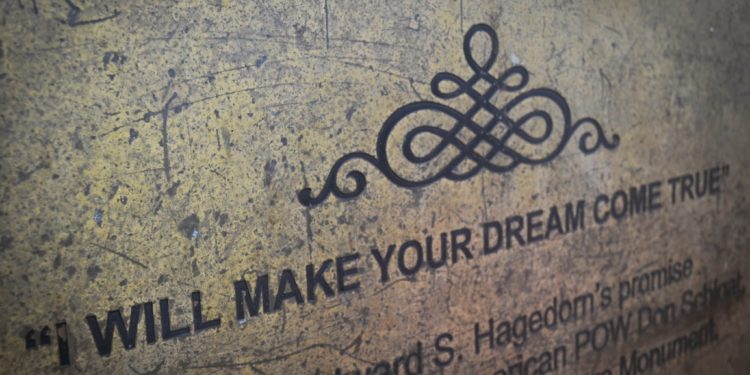 Just beside the Palawan Cathedral is Puerto Princesa City’s walled park, the Palawan Massacre Monument, where a commemorative marker is installed in memory of the World War II American Prisoners of War (POW’s) who were massacred in this place on December 14, 1944.

A sculpture of an emaciated American man in chains rising from a fire, symbolizing the oppression of the POWs and the miraculous escape of the 11 survivors.

“I WILL MAKE YOUR DREAM COME TRUE”

Don Schloat’s dream to install a commemorative marker on this site began March, 2007 when PSU President Teresita L. Salva and Mrs. Ellen M. Hagedorn headed the collaborative effort to gather support from the Palawan WW-II veterans and the people of Puerto Princesa, and culminated with the pledge of support by City Mayor Edward S. Hagedorn in September 2009.

American WW-II POW’s were massacred in this place on December 14, 1944.

On that day, Japanese guards stationed here in Palawan ordered the American POW’s under their control into the air raid shelters.

Japanese soldiers suddenly poured gasoline on and into the American POW shelters and set them on fire with flaming torches, followed by hand grenades. As the American POW’s engulfed in flames broke out of the fiery death traps, their Japanese guards machine-gunned, bayoneted, decapitated and clubbed them to death.

Of the American POW’s, only 11 survived the massacre. This memorial is by artist Don Schloat, a former POW of the Japanese at Palawan.

When I went to Palawan last year, I was only thinking of going to the beautiful beaches and lagoons in El Nido, the Underground River, and Baker’s Hill because this is what people are usually looking forward to the island. But little did I know about the history of Palawan until my last day in Puerto Princesa.

I was glad that this place was part of the city tour package. After reading the words on the marker, I just had to pause and honor the memory of those people who died — and even those who survived. They deserve the highest honors for the sacrifice of their lives.