I only have two major travel goals in life ever since I was a child. The first one is to trek the Himalayas. The second is to explore the Hang Son Doong Cave in Vietnam which is the largest cave in the world. But achieving these two goals would probably take me a long time. Both are too expensive and I simply cannot afford them right now. So imagine my utter disbelief when I learned that the cave master himself, Joni Bonifacio, of Trexplore the Adventures, gave me a chance to join the 3-day spelunking exploration to Langun-Gobingob cave. I was, to say the least, squealing with excitement!

Langun-Gobingob cave is the largest cave system in the Philippines, with an area of 900 square meters spanning over 12 different cave systems. It used to be the second largest in Asia until recently.

The magnificence of the ecosystem inside Langun-Gobingob cave is astounding. We passed through dark tunnels, countless holes, and seemingly bottomless chasm. We also chanced upon verdant mosses and ferns. The cave also houses several species such as blind albino crab, bats, venomous snakes, birds, and much more.

I am not an experienced caver, nor am I an experienced adventurer. So when I got the news that I will be joining the 15th Spelunking Adventure to Langun-Gobingob cave, I had to do some preparations. After all, as a travel blogger who promotes the 7 Leave No Trace Principles, I had to make sure that I plan ahead and prepare – both physically and mentally.

Langun-Gobingob cave is not for the faint-hearted. You will have to embark long hours of trekking dark and treacherous trails, going down vertical drops, and crawling through tight holes. You may also need to mentally prepare if you have fear of enclosed spaces and terrifying creatures.

I only fear the deep blue sea, so being inside a cave for three days did not scare me at all. All I had to do was prepare myself physically. I admit; working at home on irregular hours made me a couch potato.

I also had to prepare a few important equipment. I made sure that I brought with me three sources of light: headlamp, flashlight, and candles.

Into the Abyss: Traversing the arduous trail to the ‘Football Field’

There were eight of us in this trip, excluding the guides and porters. Upon our arrival at the jump-off at Brgy. Panayuran in Calbiga, we trekked for about an hour to reach the viewing deck of the Langun-Gobingob cave. Seeing the massive limestone-cliff entrance of Gobingob Cave made me remember my underground river experience in Palawan. The towering karst formation of the cave’s entrance is impressive. I couldn’t believe I am just 30 minutes away from the entrance of the cave!

When we arrived the entrance, Kuya Lando, our lead guide, gave us a detailed orientation before we proceeded on preparing our caving equipment and eventually started trekking towards the cave. 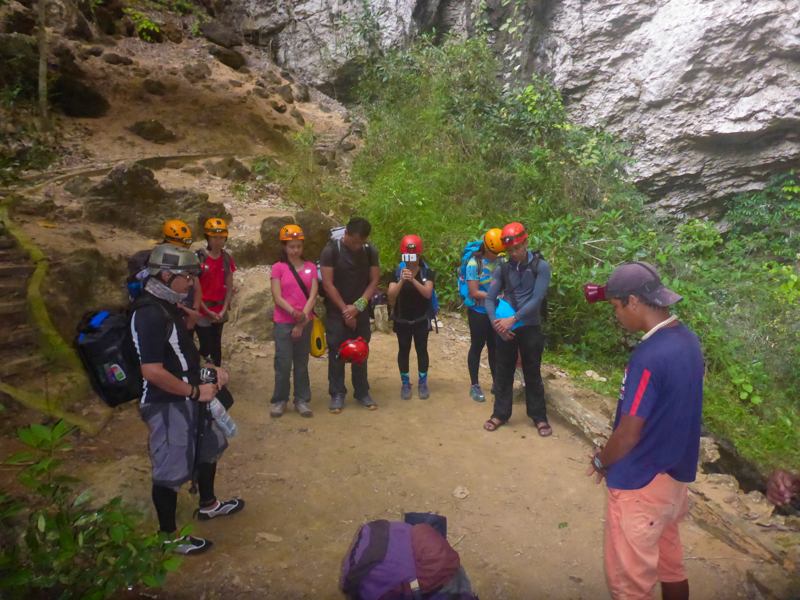 As we started descending the dark interior of Gobingob cave, I couldn’t help but savor the last few seconds of sunlight and mentally said, “See you in three days, Mr. Sun.” 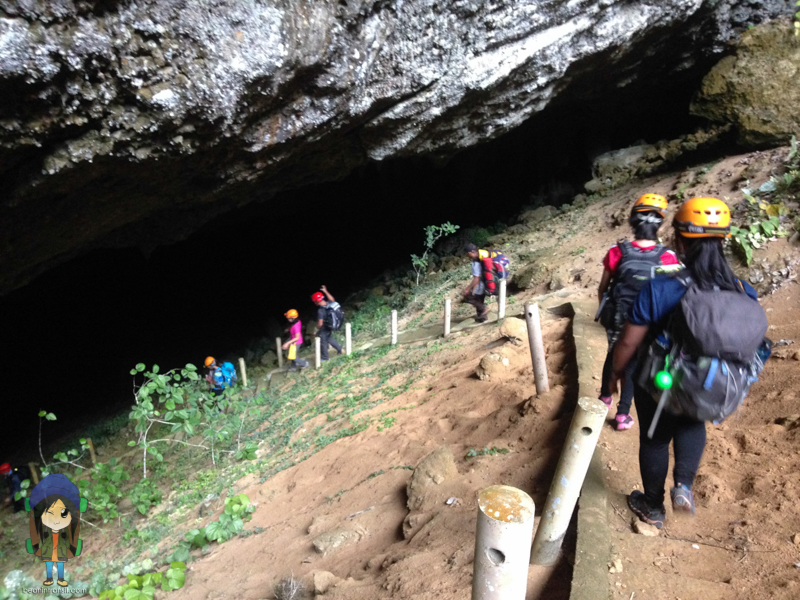 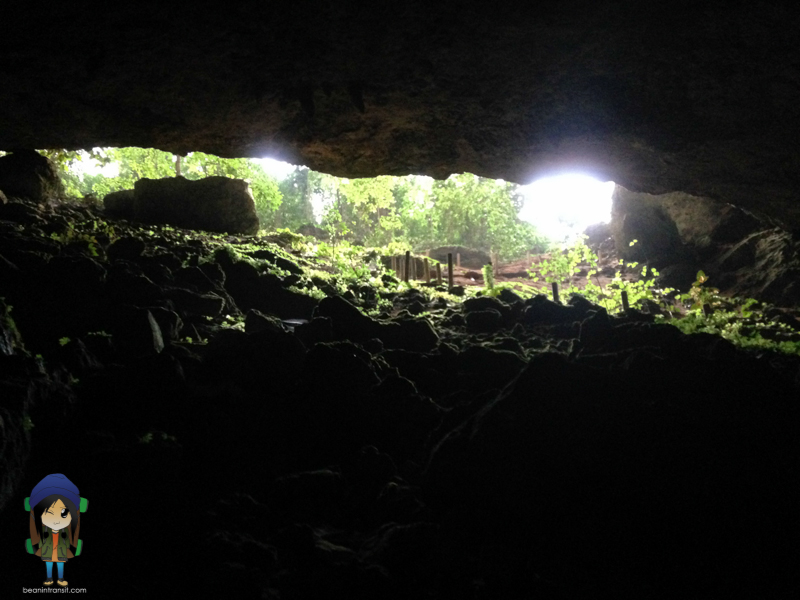 In less than 10 minutes, we were engulfed by complete darkness. The trail towards the Gobingob chamber was arduous enough and it took me awhile to adjust my vision to the darkness. We passed by gigantic stalagmite and stalactites, and eventually reached this spot called ‘The Stage’ where a giant flowstone formation is located. It was glittering majestically. We were careful not to touch this beauty to avoid brushing off those glittering crystals. The slightest touch of our hands can cause permanent damage. 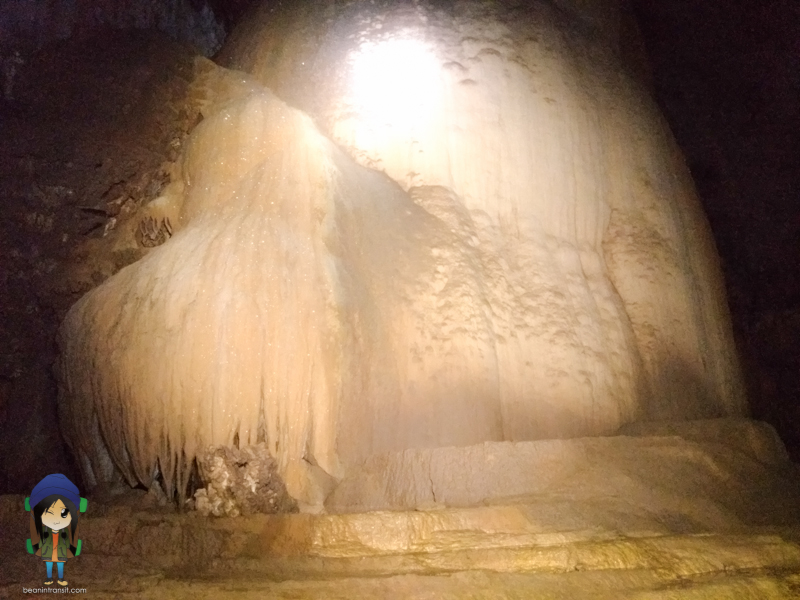 It was great to see life inside the abyss.

About 30 minutes from The Stage, we arrived at the campsite which is called the Gobingob football field. We set up our camp, cooked dinner, and rested for a while before exploring the upper Gobingob chamber. 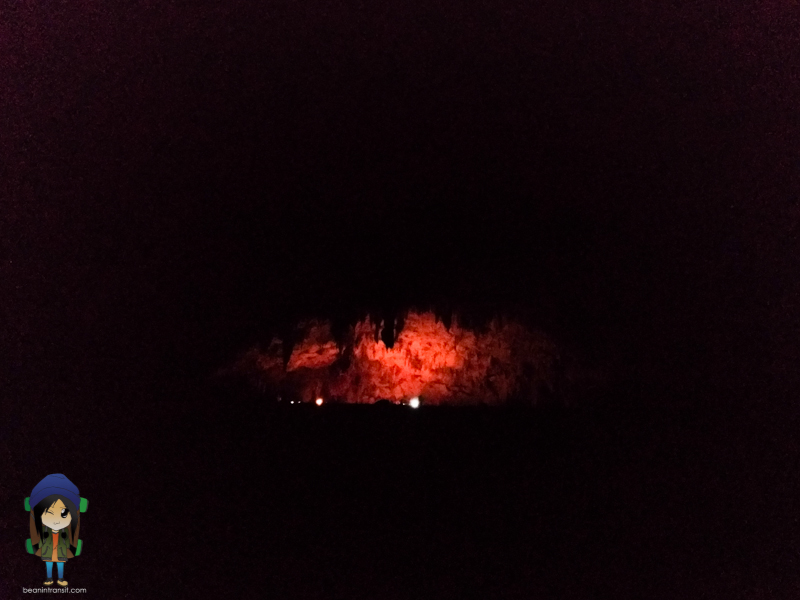 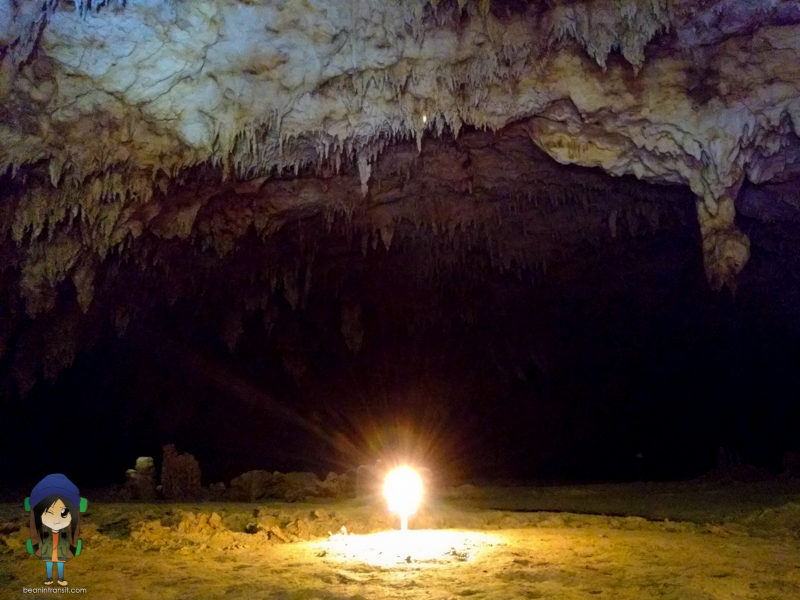 Journey to the Upper Gobingob Chamber

It was a relief to leave our heavy backpacks at the campsite. I only brought my Modern Nomad drawstring bag to stuff my phone, trail snacks, and water. We went straight ahead all the way deeper to the upper Gobingob chamber. 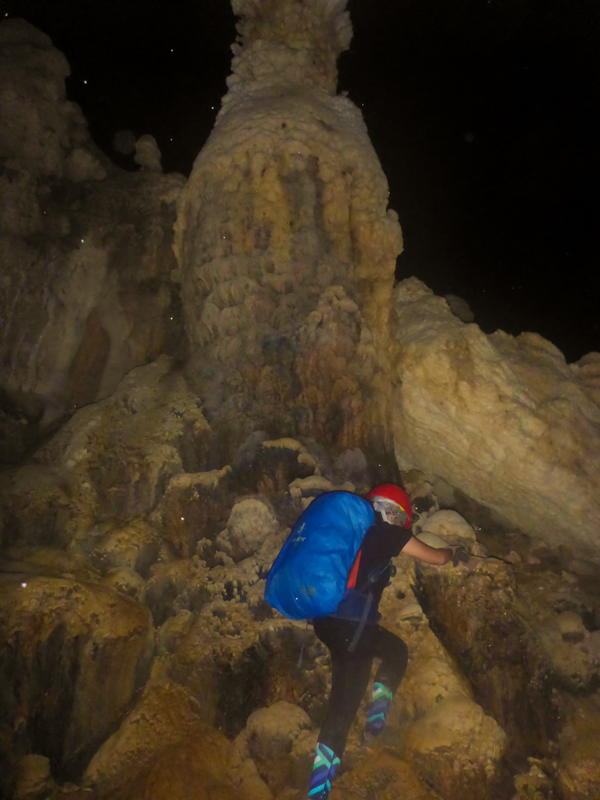 I did not expect the seemingly endless ascent. Just like what Kuya Gian and Ate Shiela of Adrenaline Romance said, Langun-Gobingob cave is most definitely like a mountain within a cave!

As we went farther, I noticed that the ground and the walls were becoming even whiter which means that these crystalline formations are still untouched. They certainly looked like glittering snowflakes! 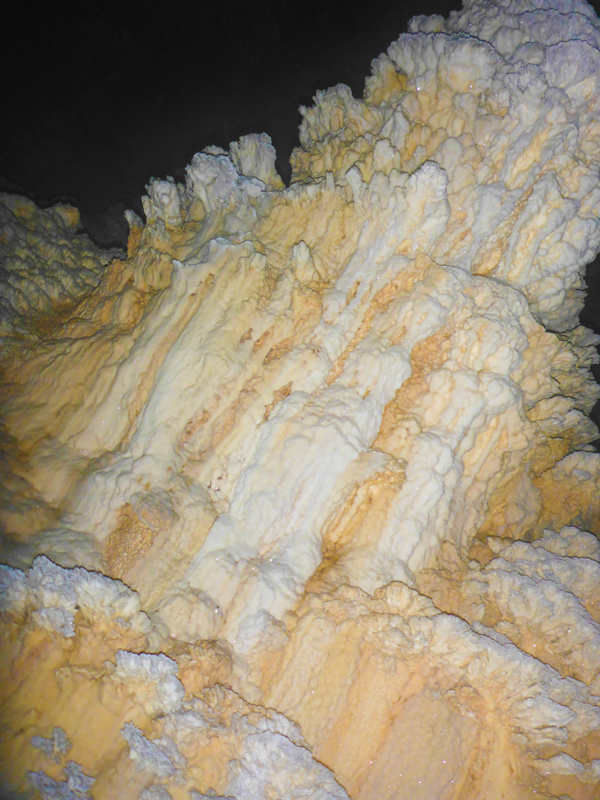 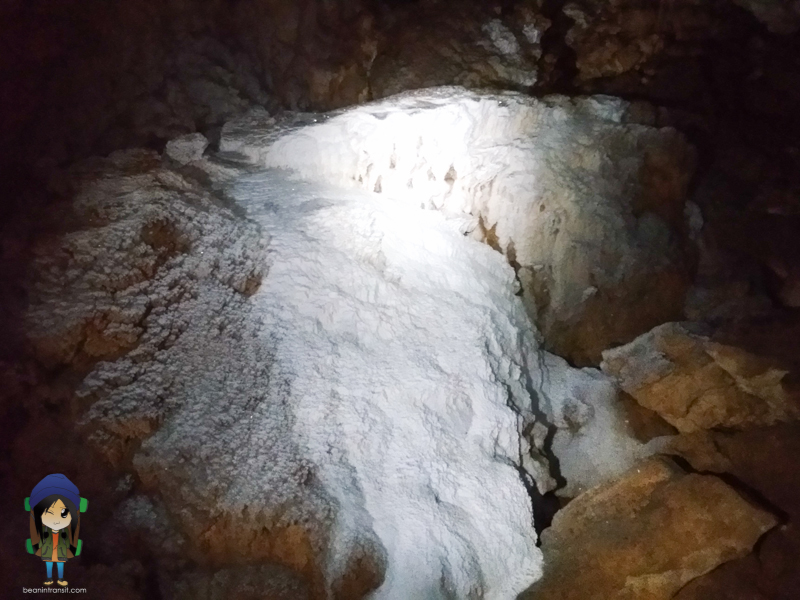 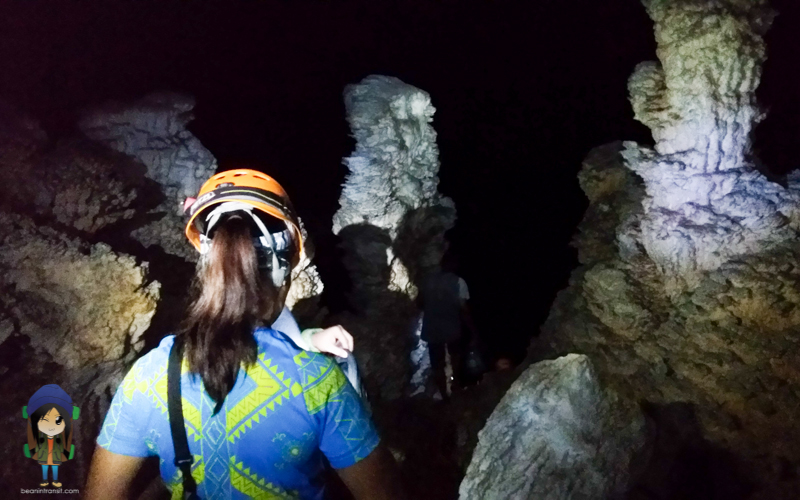 Scrambling through loose and spiky rocks, I could not help but wonder how I managed to pass through those treacherous trails. It was also difficult to take pictures. Considering the limited amount of light provided by our headlamps, I did not bother on seriously capturing what was inside the cave. I just made sure to enjoy everything that I have seen with my own eyes. After all, it is the actual experience that is more important. 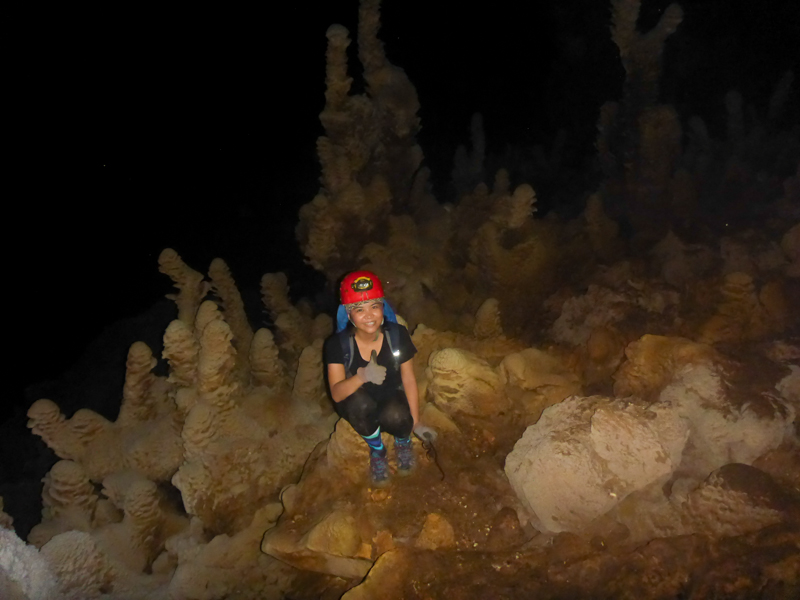 Exploring Gobingob cave reminded me that there is still so much to learn and explore in life. Climbing the loose rocks in pitch black darkness and not being able to see the towering ceiling reminded me that life itself is too hard to fathom. I have said this a number of times in the past that discovering new things from traveling is a humbling experience. You can always try to do things your own way. But in the end, it is always Mother Nature who says the last word.

Early the next morning, we left the football field and proceeded to the entrance of Langun Cave. 30 minutes later, we arrived the spot I was anticipating for this whole exploration – the Langun vertical area. It is a 40-meter vertical drop towards the deeper part of Langun cave. In order to abseil, our lead guide, Kuya Lando, set up a safety harness rope around three dead stalagmites situated right beside the part where we have to descend. 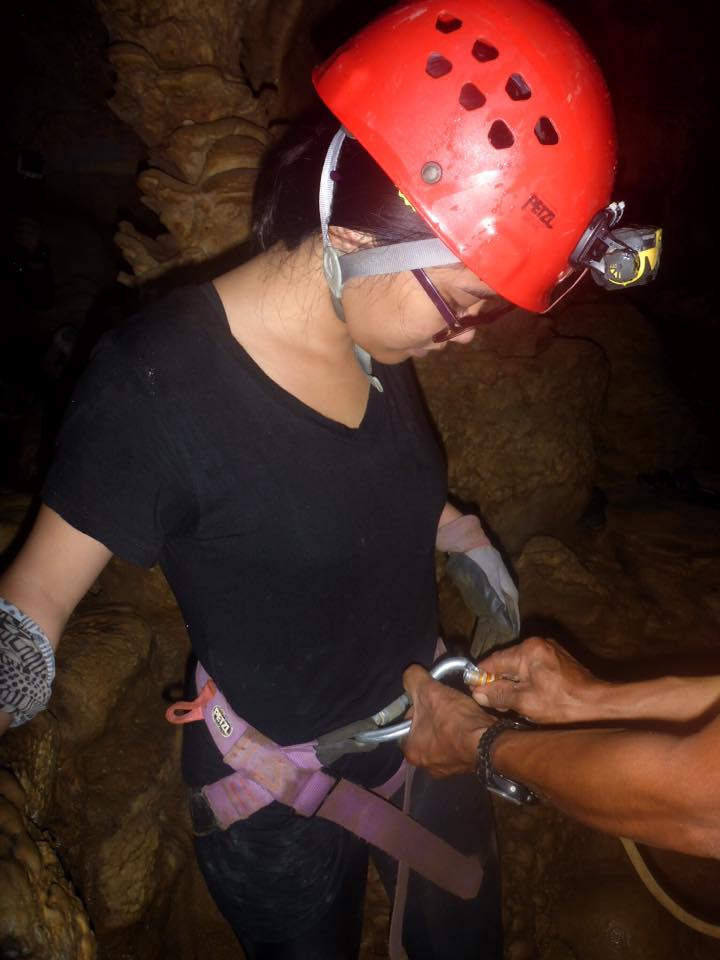 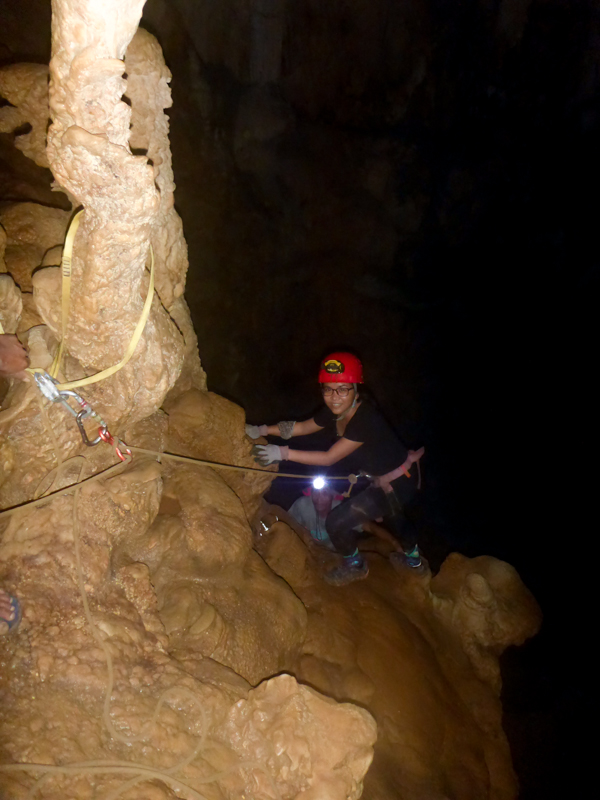 One by one we descended to the pitch black darkness. I was in awe to see the height of the cliff when I reached the bottom and looked up to see the others who have not abseiled yet. The tiny illumination of our headlamps in that dark chamber made me feel smaller than I already am.

A tiny speck of a dust in the universe. 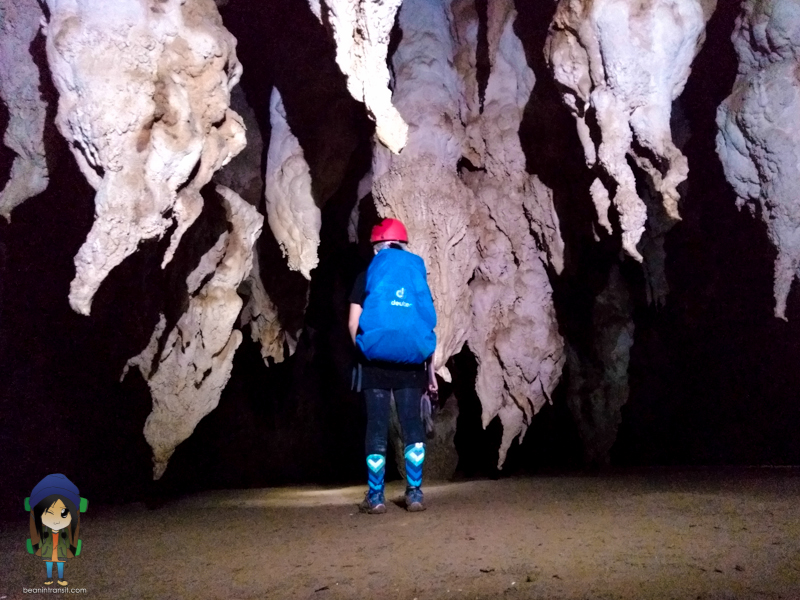 After an hour or so of trekking, we reached the bat guano area. To me, it was probably the most challenging part of the whole trek. We were literally wading our way through a thick pool of sticky brown feces!

At one point, I lost my balance and found my right foot got stuck in the pool of bat guano. When I moved, it went all the way up to my knees. I could not move at all. It was terrifying and funny at the same time.

The putrid smell, the laborious trek, the dirty clothes… it was as if I was in The Walking Dead series! When we finally reached the Langun campsite, I laughed at how dirty my clothes were. I looked like I survived a zombie apocalypse.

The sight of the cave opening and verdant vegetation at the Langun campsite was a sight to behold. 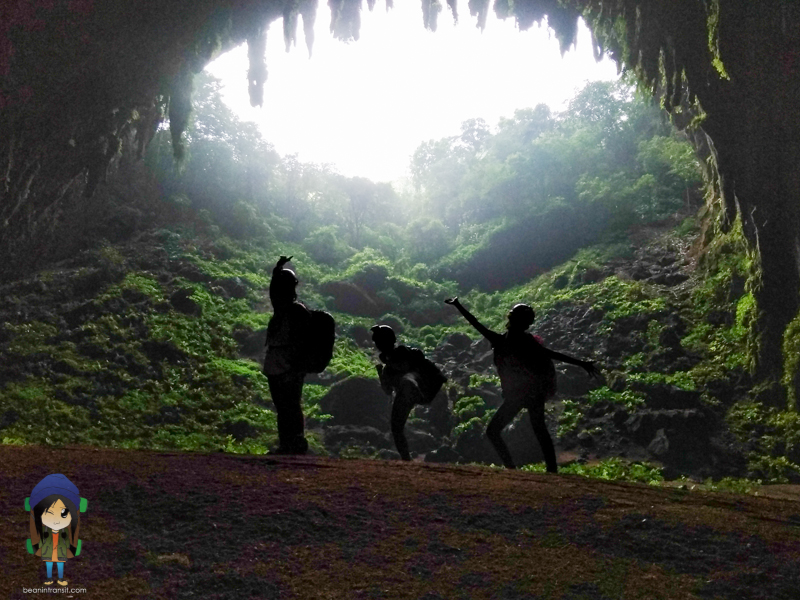 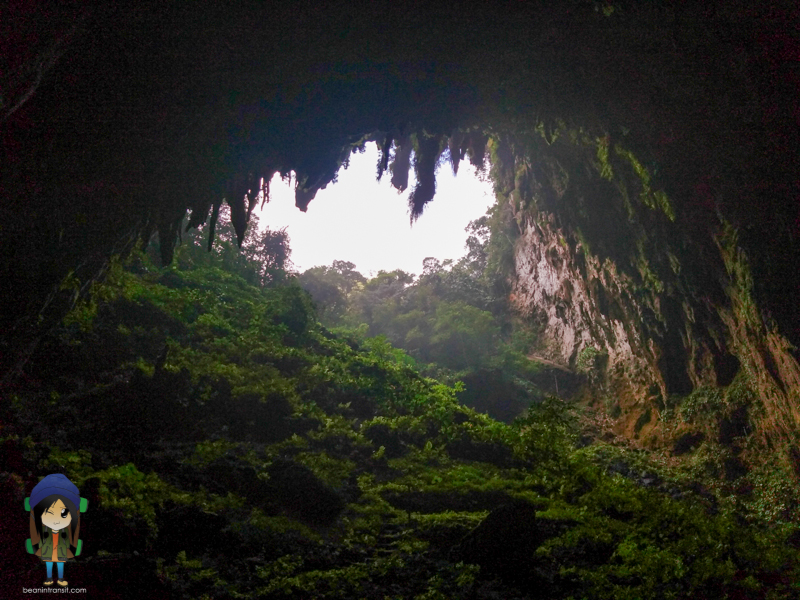 After we had lunch, we waited for several hours to witness birds and bats getting out of the Langun exit. It was a great privilege to see the jaw-dropping scene of thousands of bats flying around in circles.

Finally, we cooked dinner and made preparations to explore the lower Langun cave. It was time to descend to the deepest part of the cave. We rappeled 3 meters towards the snake room. It’s literally called the snake room because it is where the snakes in the area live. And in order to get through, you have to crawl this super tiny hole. 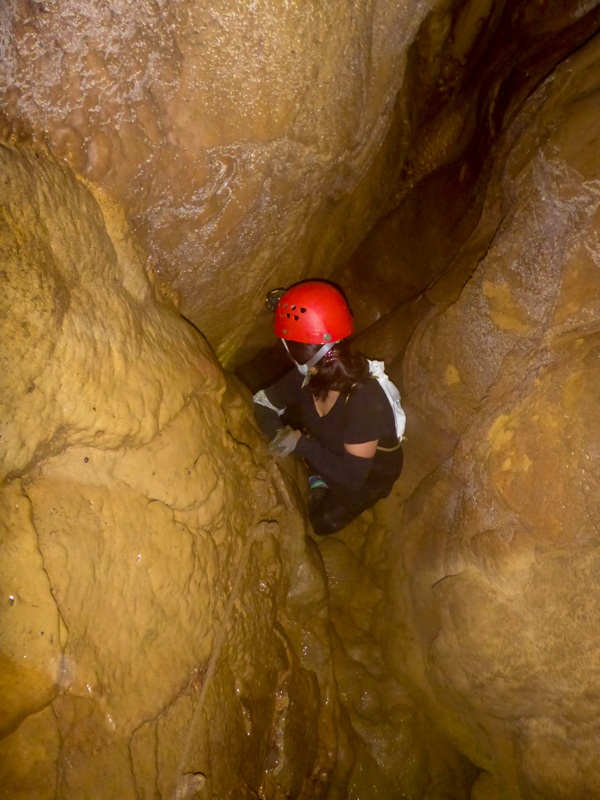 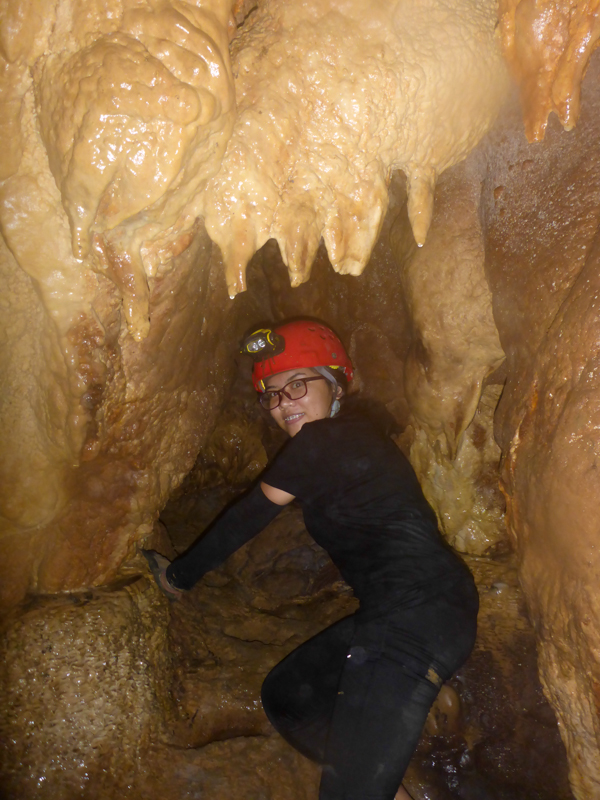 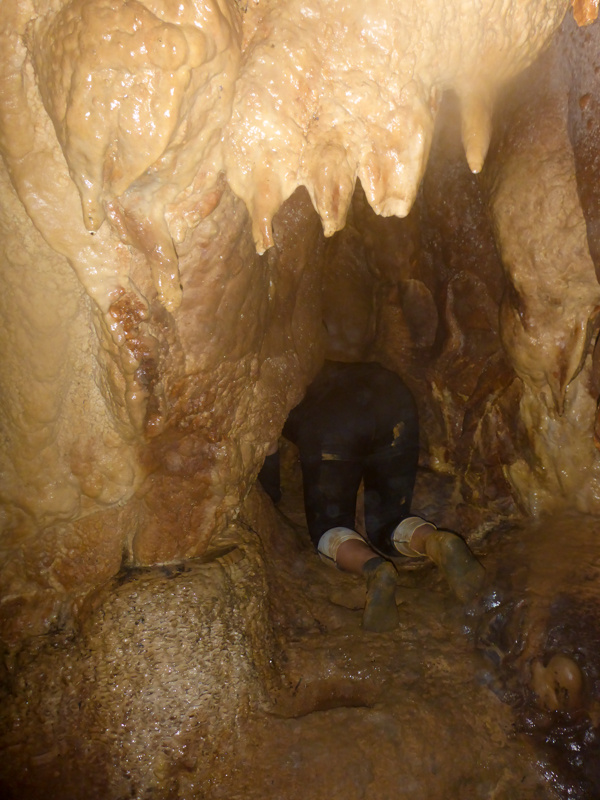 We passed by water terraces, saw albino fish and crabs, and trekked the thick pool of mud all the way towards the Langun underground river. We river trekked for several minutes until we reached the underground waterfalls. Isn’t that spectacular? A waterfalls 600 meters below the ground! 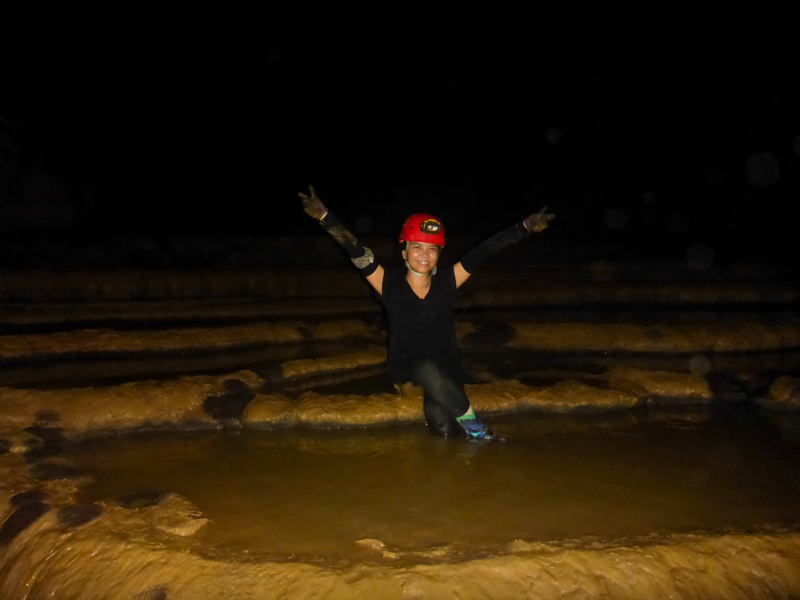 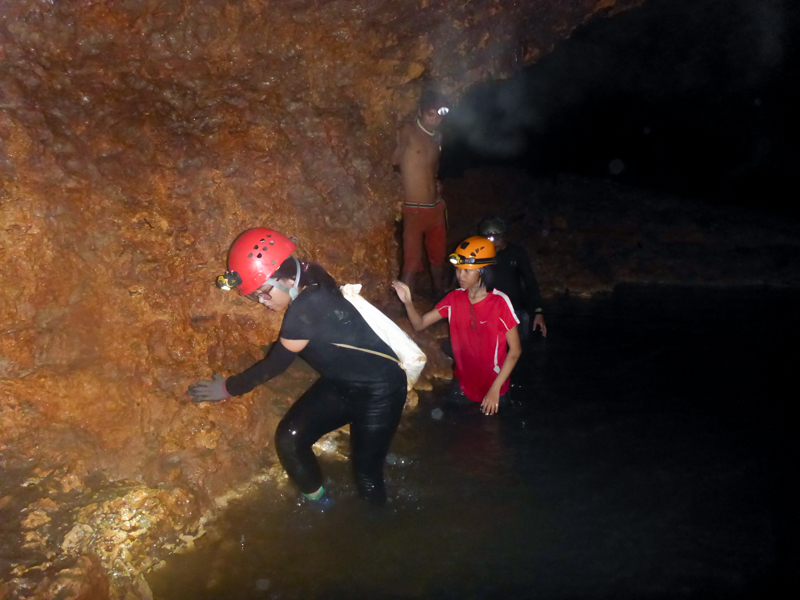 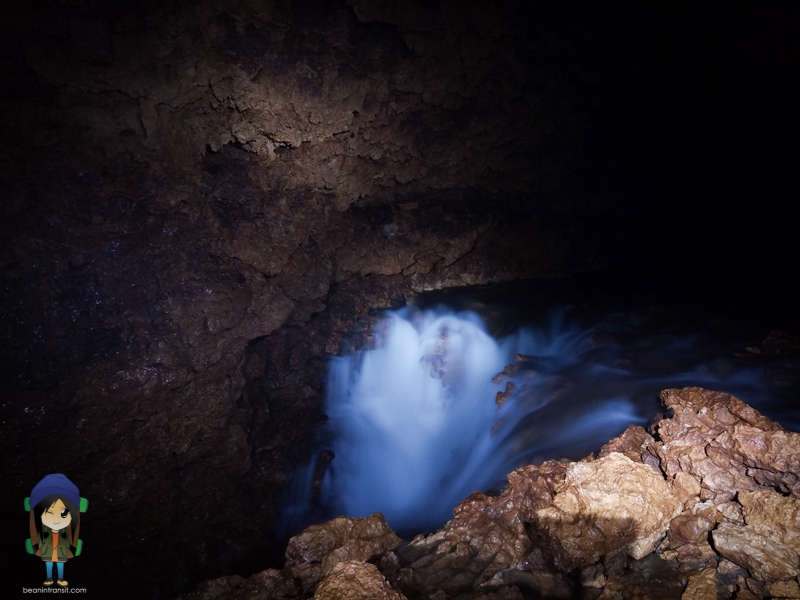 But the adventure is far from over. We continued trekking for about an hour to reach the dead end of the lower Langun cave. 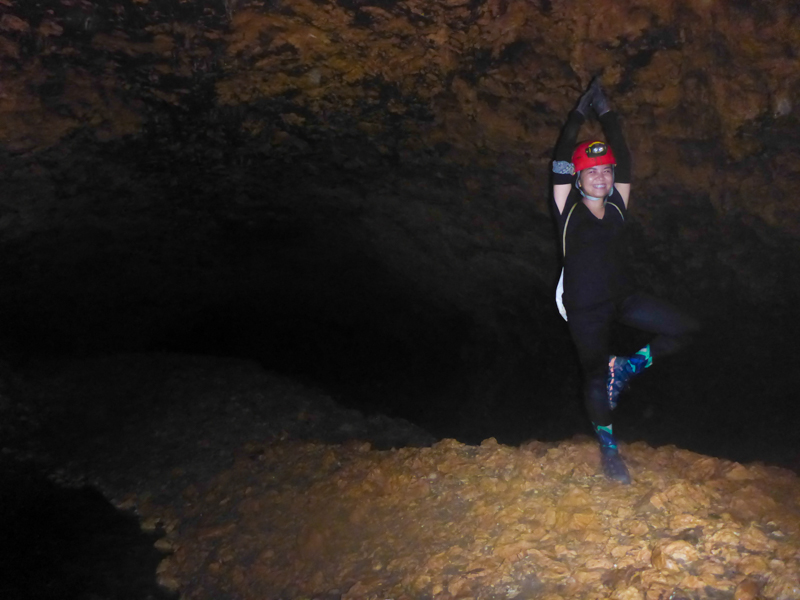 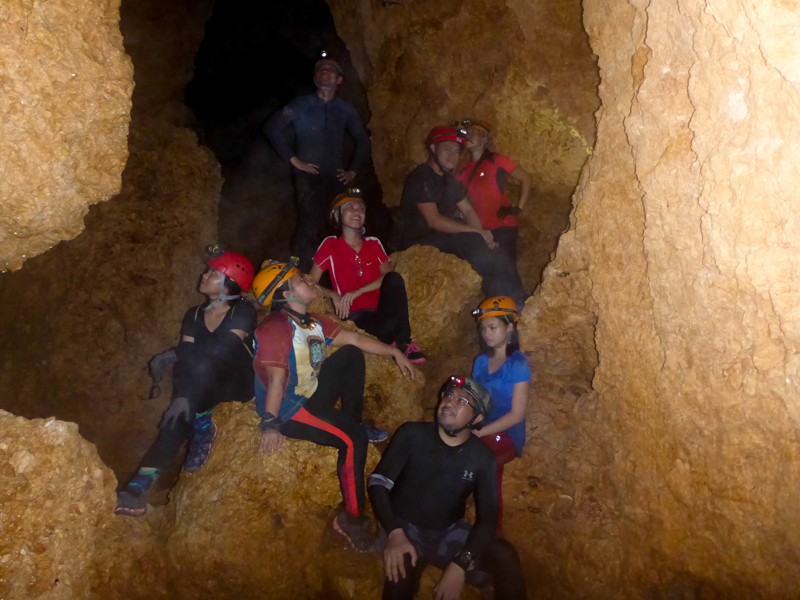 On our way back, we stopped by the water terraces for a while to wash our mud-spattered bodies. Although we got dirty again after that because we still have to crawl all the way back to the snake room and rappel up going back to the campsite. 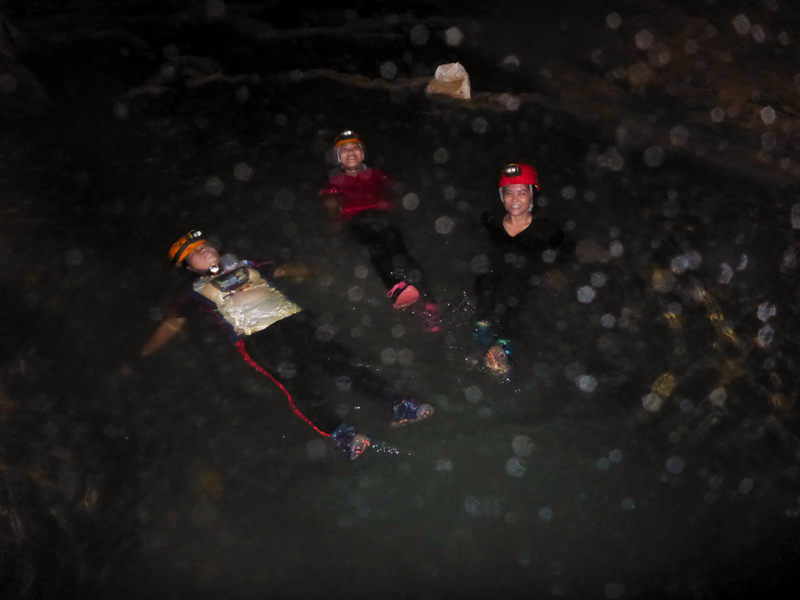 I slept well that night. Despite the fact that there were poisonous snakes moving around our camp, I just tucked myself inside my sleeping bag and set off to dreamland. 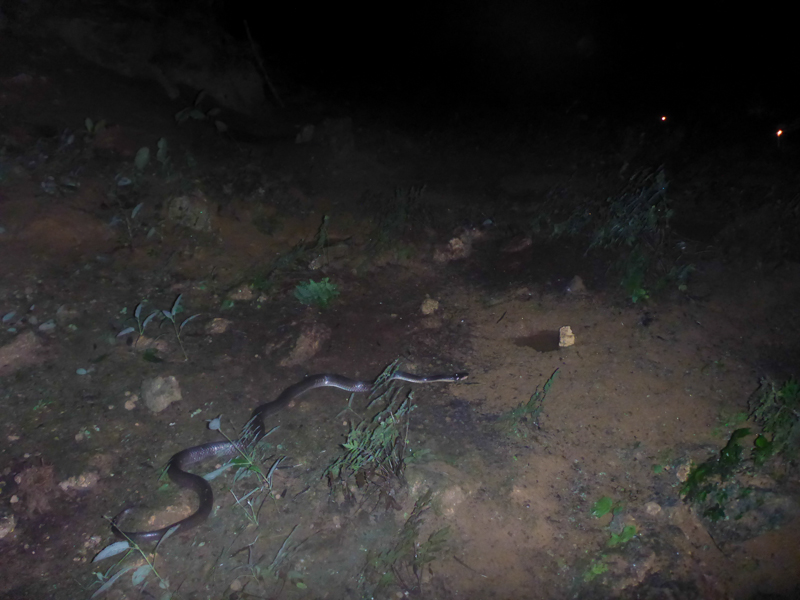 We bid goodbye to Langun-Gobingob Cave on the third day.

Climbing all the way up to the mountain was back-breaking and pretty exhausting. The jungle trek was a long one and took about 3 hours to finish!

Suffice it to say, this three-day adventure was a spelunking, mountain climbing, river trekking and, rock climbing in one! 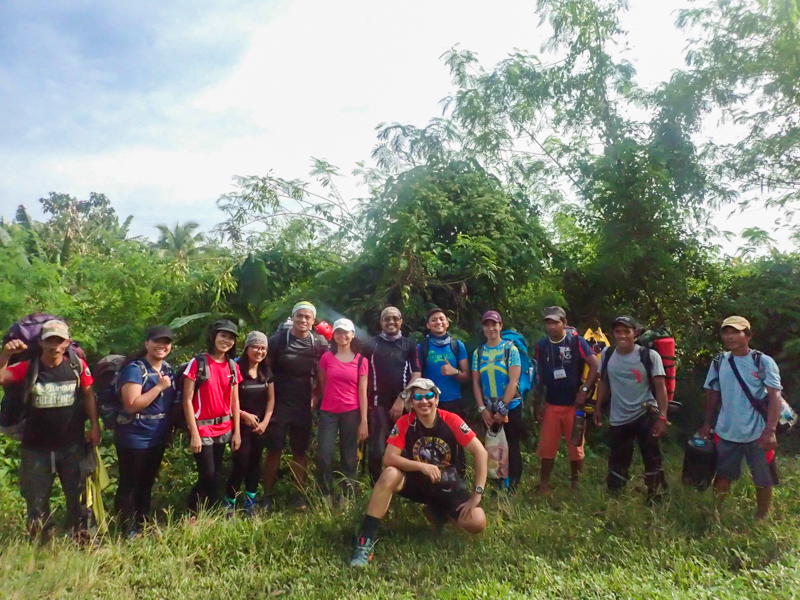 The whole spelunking activity was exceptional. What a privilege it was to witness God’s creation! Indeed, there is beauty in the dark.

If you want to experience the Langun-Gobingob Cave adventure, please visit the official website of Trexplore The Adventures or check out updates on their Facebook page.