I was feeling under the weather the night before, and even while on my way to the campsite, so I was not expecting that I would totally enjoy this trip. I was wrong. It was super fun! I was very happy to see that more people from the blogging community I am in have finally joined the second 1000-Peso Travel Challenge. 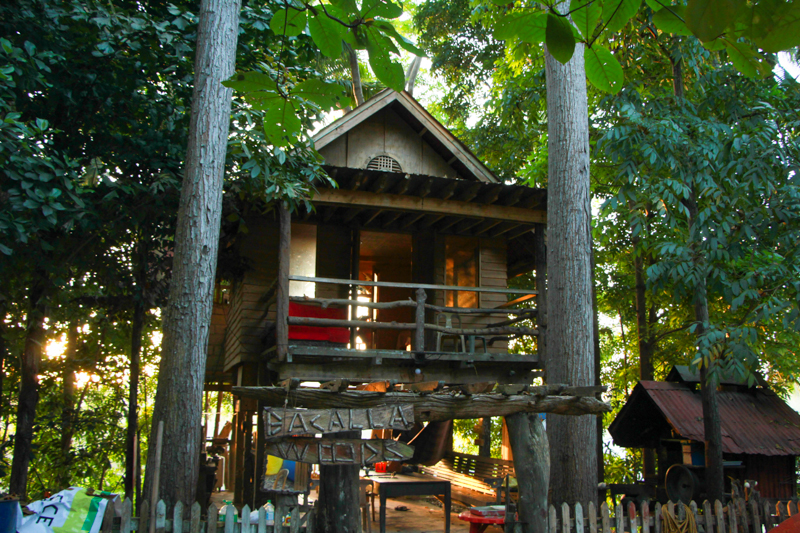 Bacalla Woods is a camping site located in Libo, Ilaya, San Fernando. It is a place where artists, environmentalists, adventurers, or simply nature enthusiasts go. It is located about 1 kilometer from Hidden Paradise Mountain Resort in San Fernando, Cebu. A friend initially told me about this place, and I eventually searched for them on Facebook. I got hold of Mr. Ian Bacalla and he sent me a video of what they do in Bacalla Woods. I discussed our plans of having this place as our destination for the second 1000-Peso Travel Challenge.

On Our Way to the Campsite

We were divided into three groups on our way to the campsite. Three of my friends, Rady, Jazmine, and Chanel met at the South Bus Terminal, while the others who live near San Fernando went directly to the junction going to the campsite. Sean, Rome, and I joined Ryan and his wife in their car since we were the ones bringing the food and other heavy stuff. 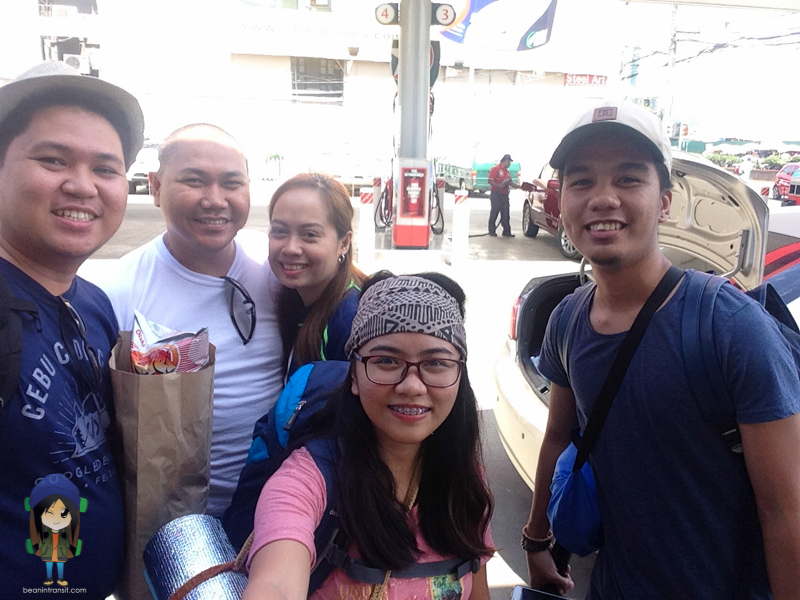 Everything was going according to plan until the Universe decided to play a little joke on us. As we were approaching Talisay City, Ryan’s car started acting weird. Having zero knowledge about cars in general, I had no idea what was about to happen. The engine just stopped as we were approaching Star Mall in Talisay. Luckily, there was a gasoline station nearby.

We were waiting for a technician to arrive, but unfortunately, after several hours of waiting, there was no chance the car would get fixed. We started to get a little bit worried because it was getting dark. Worse, everyone was already at the campsite, and we were the ones carrying all the food! There is no signal at the campsite too so it was impossible for us to contact them.

Luckily, Ryan and his wife was able to contact a friend, and was able to borrow another car! It was almost night time when we resumed our journey. We reached the campsite just a few minutes before 7 PM.

Our first order of business was to cook our food because everyone’s stomachs were already growling. Thankfully, everyone at Bacalla Woods Campsite helped us prepare everything. Thank you so much! 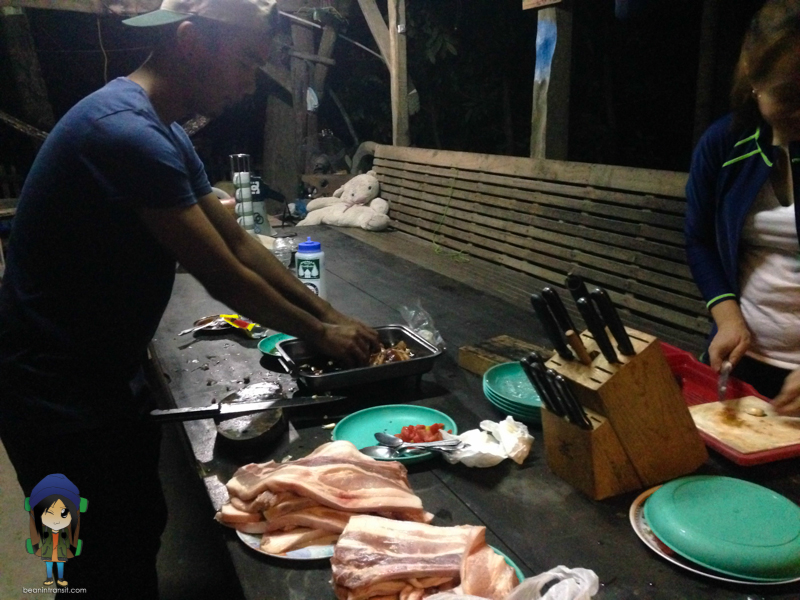 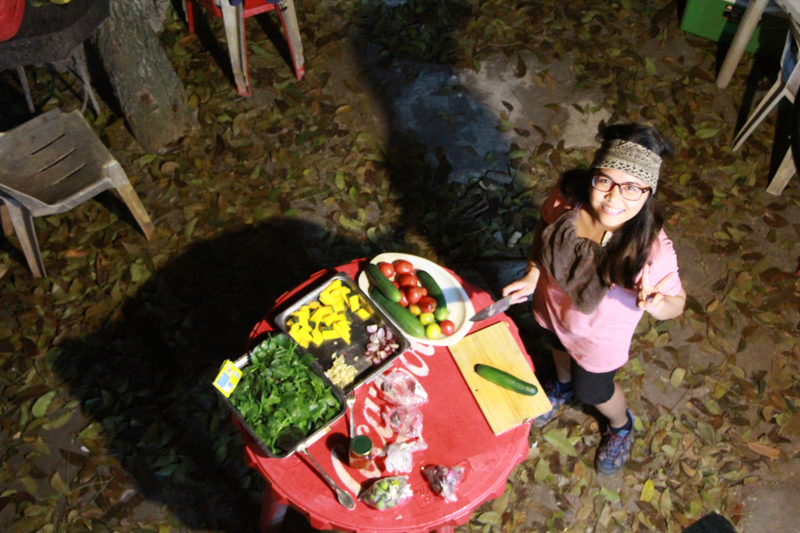 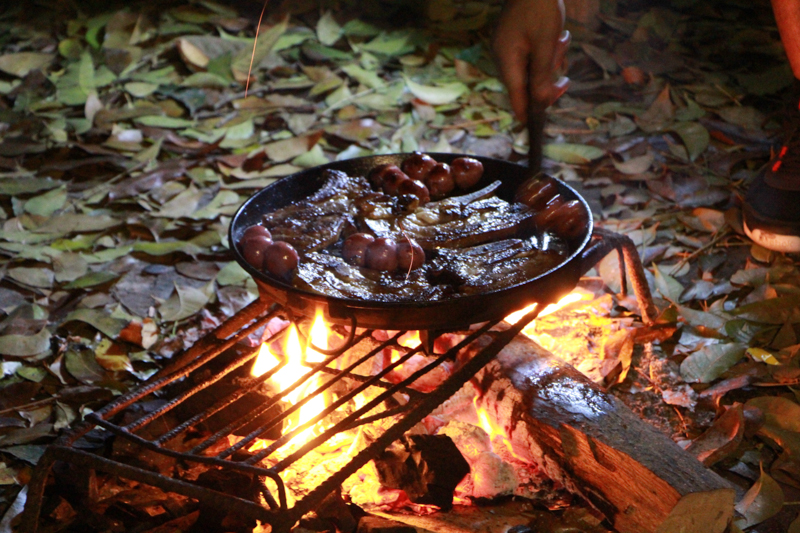 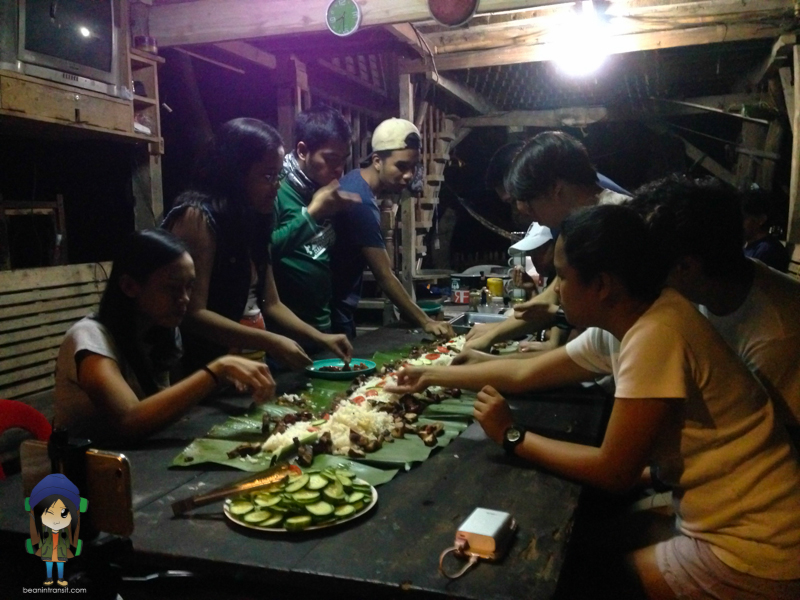 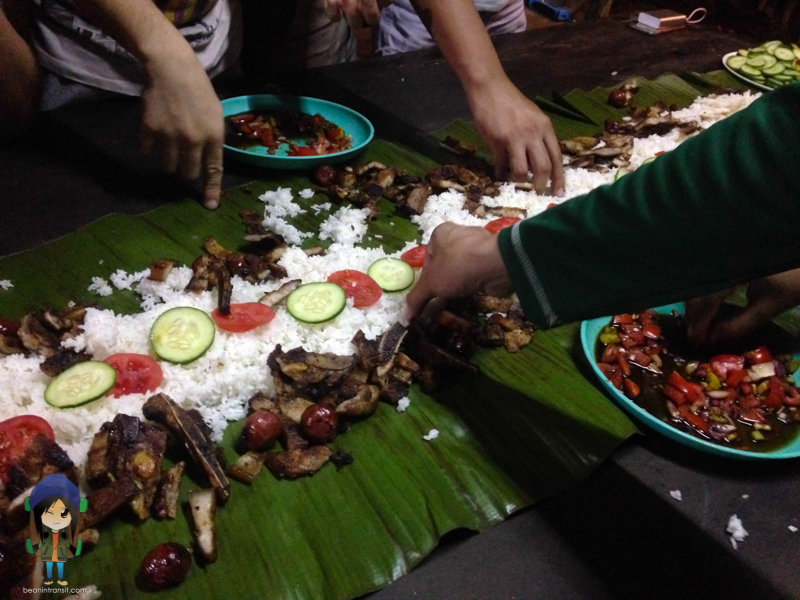 Right after dinner, we decided to sit down and get to know each other because most of us actually met for the first time. It was kind of weird that I have known most of these people since 2014 because I have been following their blogs. It’s like you’ve known them forever, but it was actually my first time to meet some of them. Haha!

It was one hilarious GTKY session because of the funny questions that we had to answer. Definitely one way of getting to know each other. 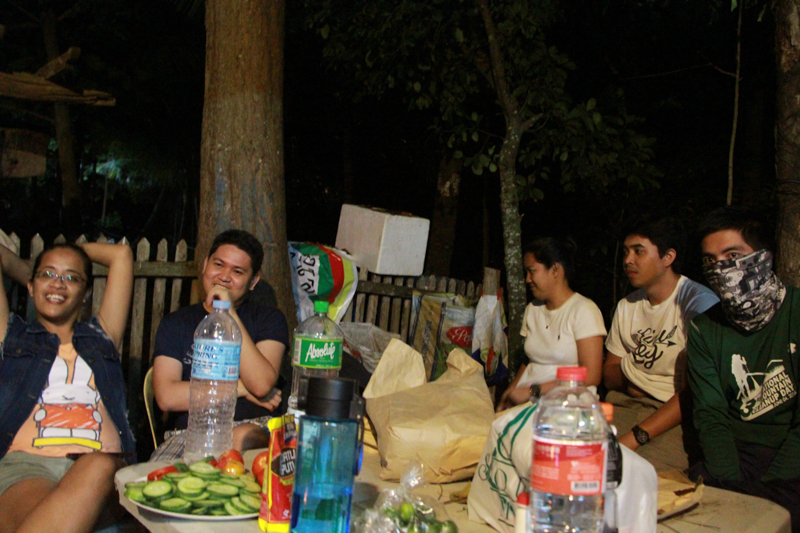 We played this card game which I totally forgot the name, but I pretty much enjoyed it. Because I won, somehow. I’ve never been good with any card games before, so it was a first.

While we were busy playing, the people at Bacalla Woods lit a bonfire for us, so we decided to sit around it at first but eventually transferred because it was starting to get really hot.

Sean of His Hidden Letters and I borrowed Ryan’s guitar and played a few songs and sang, but I had to stop because my fingers weren’t cooperating. I can no longer play the guitar the same way before. Haha! 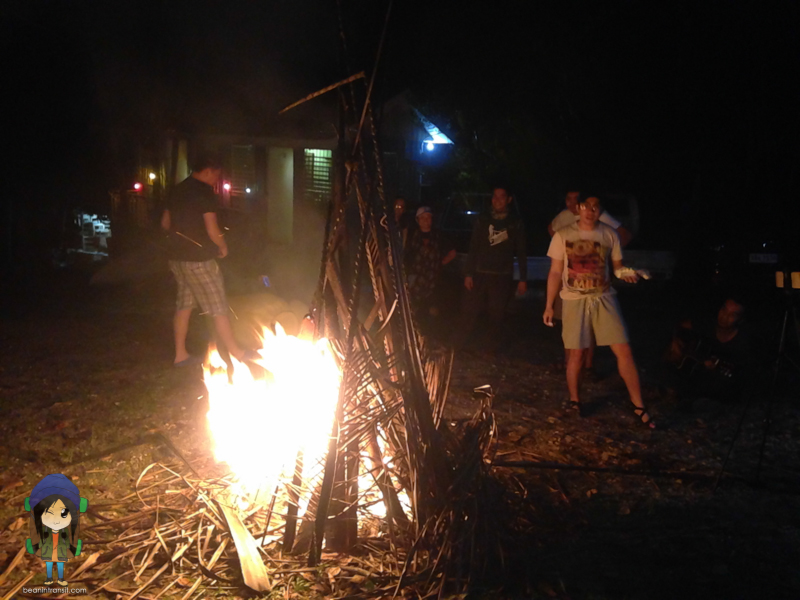 We gathered somewhere near the bonfire and we all started talking about anything, but mostly about how we can improve Cebu Blogging Community. I mean, what else can 12 bloggers talk about in the middle of the night, with nothing else to do and no internet connection? 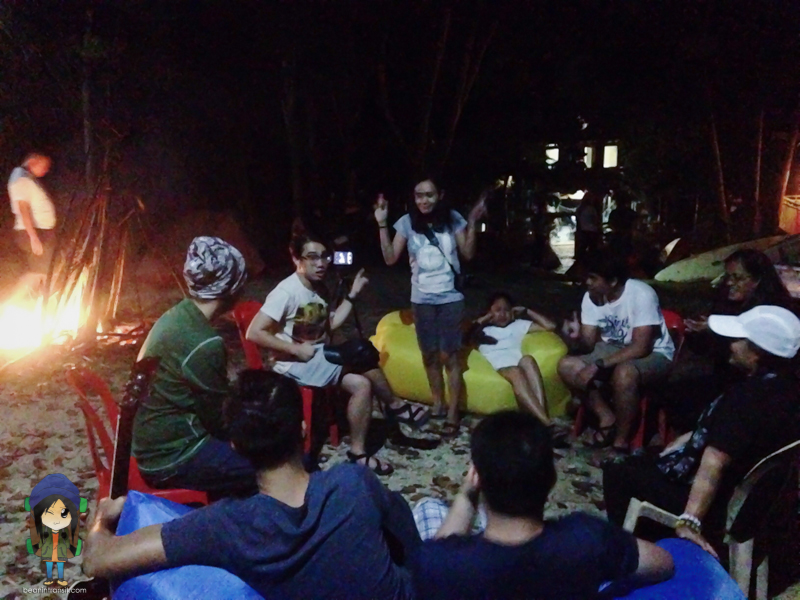 I rarely join social gatherings at night, because whenever I go climb a mountain, my companions would go resort to drinking so I would end up sleeping early because I do not want to join them. It is simply something I do not enjoy. I have nothing against it. 🙂 It was great that none of us actually drank something that night.

I would have wanted to stay up all night because I am the Queen of all Night Owls, but everyone called it a night and went to their respective tents. So off I went inside my tent to get some sleep.

I woke up a bit early the next morning and decided to check out the place. We arrived late at night, so I didn’t get the chance to explore the campsite. I am not a morning person, but there is really something about the smell of mornings that gets you hyped up. Hearing the sound of the trees swaying and the exuberant calls of the birds are pretty much invigorating. 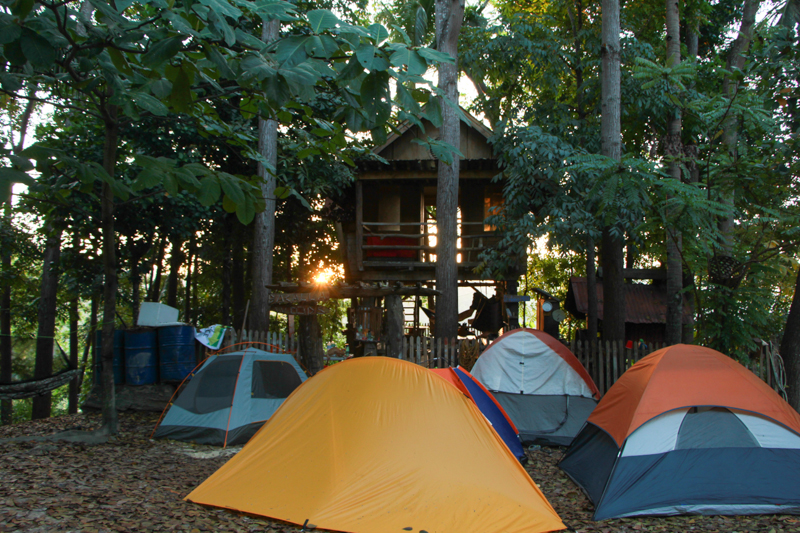 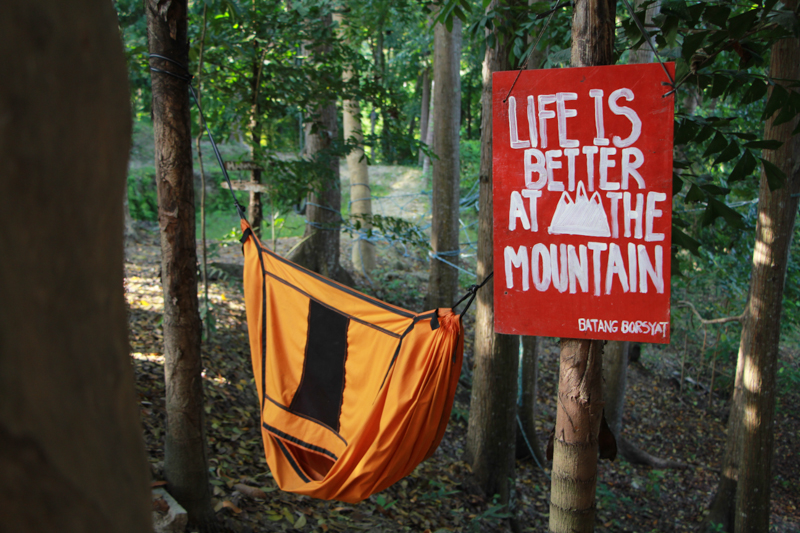 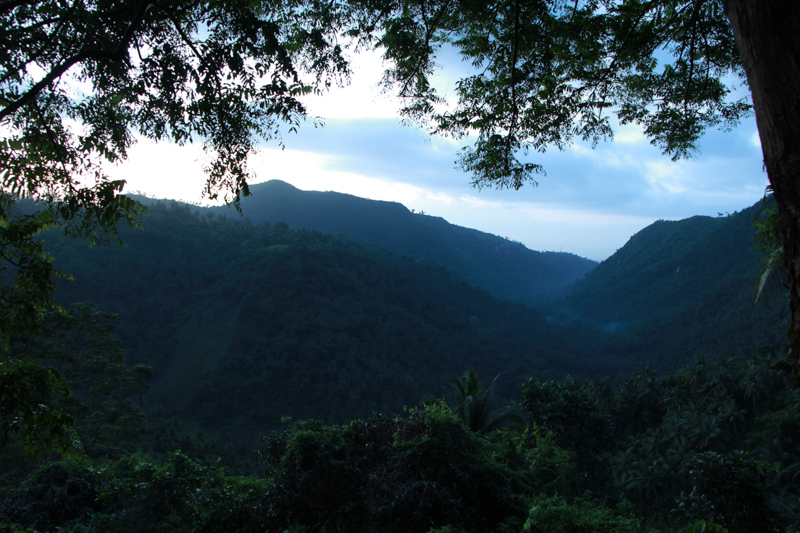 The night before, I noticed someone from the campsite who was playing with this huge bamboo stick and I suddenly remembered a conversation I had with my #HIBster friends that I haven’t played Karang yet. Ever. It is a game where the player mounts a knee-high stick and uses it for walking. Only this time, the bamboo stick at the campsite was way higher than I expected. Pang expert-level, mga bes!

I had to ask Sean to hold the stick for me to balance because mounting the stick alone was already a challenge for a petite gal like me. It was so hard to move because I couldn’t even balance myself. It was so hilarious!

I would love to play this game again. Hopefully, I can find one that is a lot less short than that.

My friends and I went back to where we pitched our tents, when suddenly Jaya Indra, a yogi friend (who happened to be at the campsite as well), called me to dance with them. Apparently, there’s this yoga dance called Kaoshikii, wherein a person would dance in rhythm to the chanted mantra of ‘Baba Nam Kevalam’ meaning “Love is all there is”. 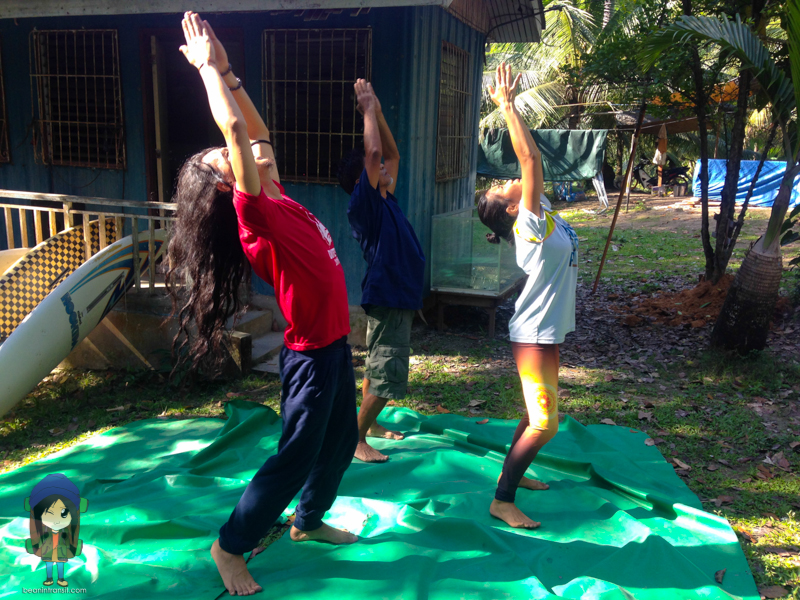 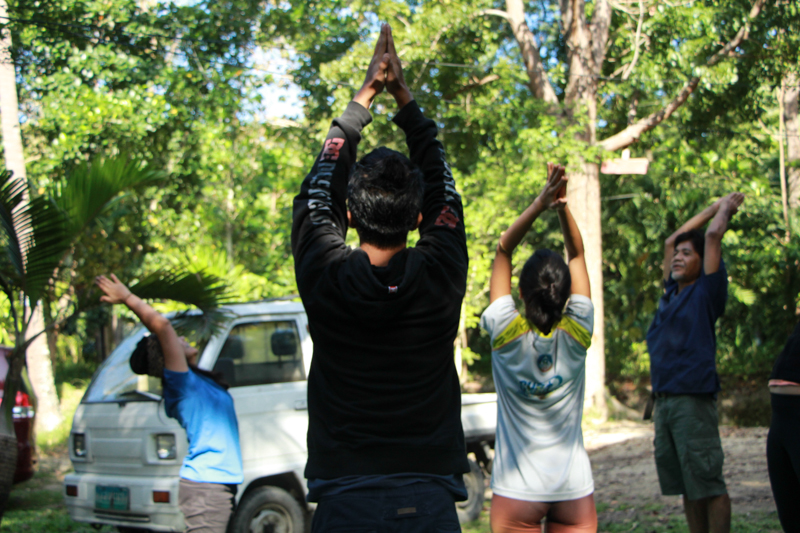 I was hesitant because I have never been good at dancing, but Jaya wanted me to try it so I did. And I messed up. A lot. Hahaha!

Kaoshikii is a dance of the mind, and I can’t seem to harmonize my hand and feet movements, which means my mind is ridiculously jumbled. I am definitely going to practice this dance at home. Who knows? I might get it.

After we had our breakfast, we proceeded to our destination that morning – Bugho Falls. Prior to our trek, we were told it would only take about an hour to reach the waterfalls. ONE HOUR. Well, it took us two hours and 30 minutes, passing winding roads and slippery rocks, under the unforgiving heat of the sun. The trail wasn’t actually that hard. Yet, all the same, it was pretty exhausting. 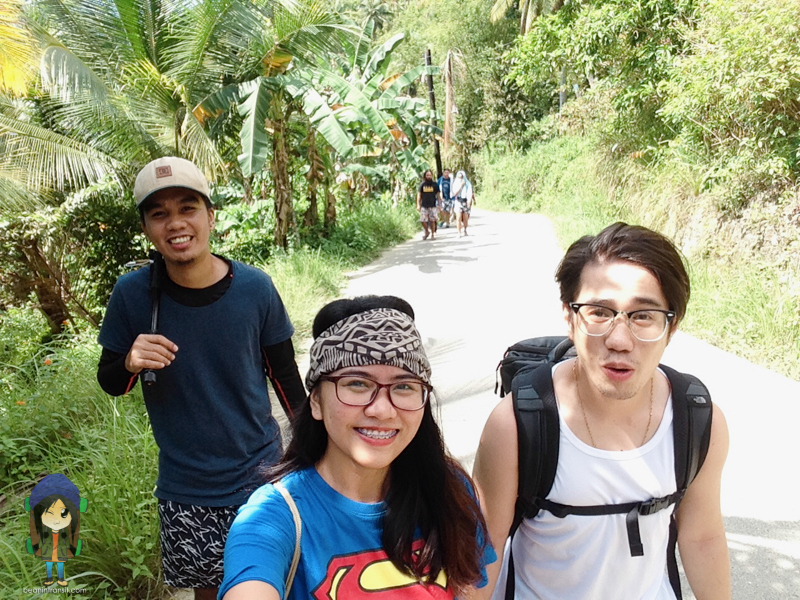 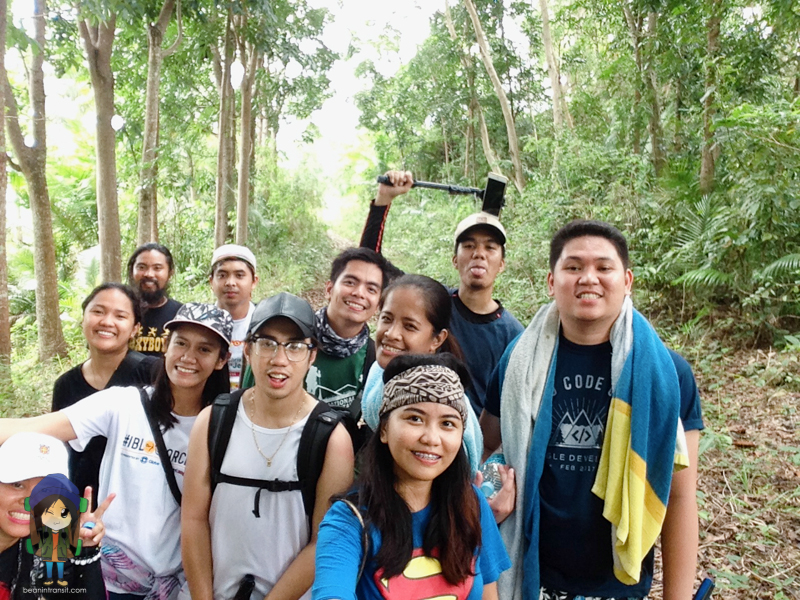 Somewhere in the woods… 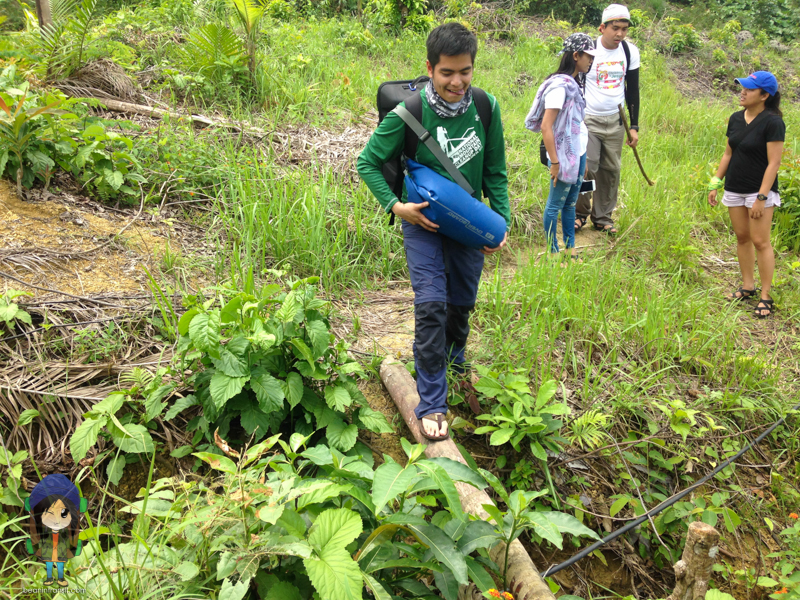 Iggy contemplating whether he’d cross this log or not… haha 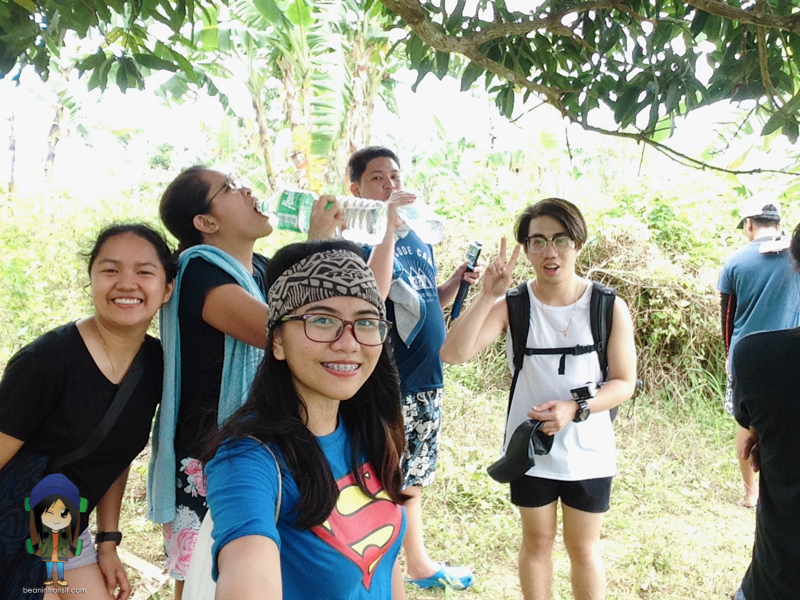 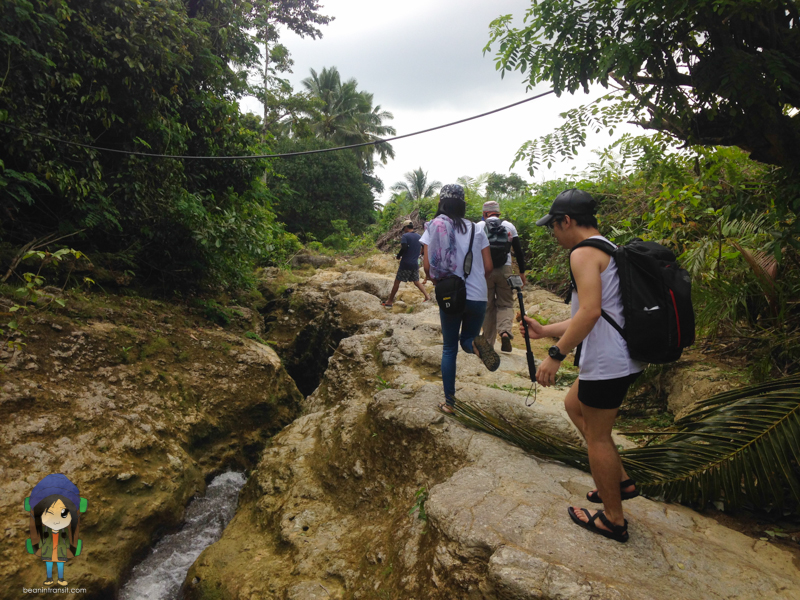 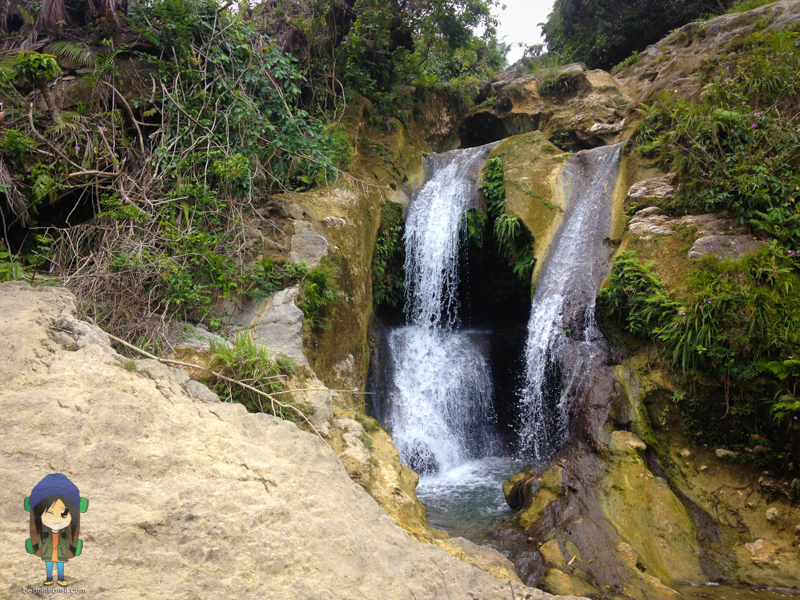 Behold! Bugho Falls. I didn’t get to take too many pictures when we arrived. I just wanted to enjoy being there. 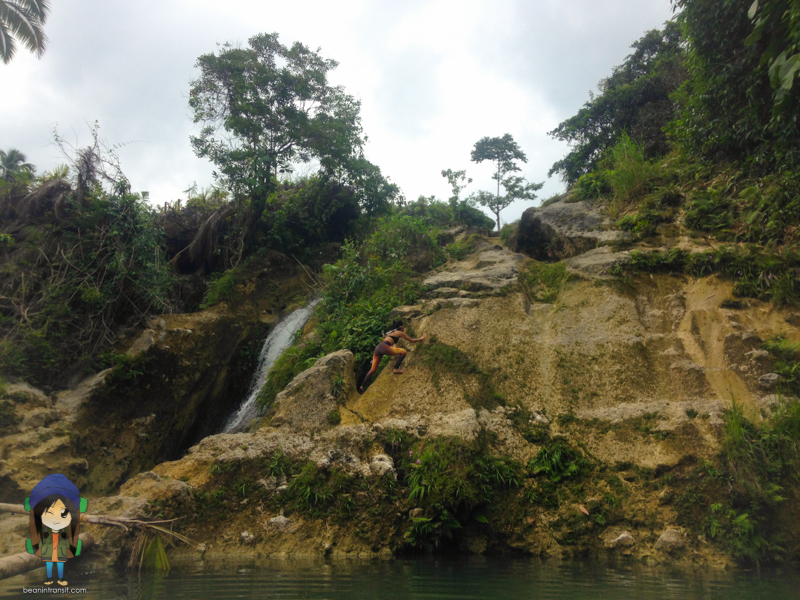 It was an absolutely fun trip. I remember telling myself last month to have a more chill trip this time, but I guess ‘chill’ doesn’t really exist in my dictionary. 😉

If you want to learn more about Bacalla Woods Campsite, please visit their Official Facebook page or contact Mr. Ian Bacalla at 0923 825 6945.

SUCCESS! See you on the next 1000-Peso Travel Challenge.