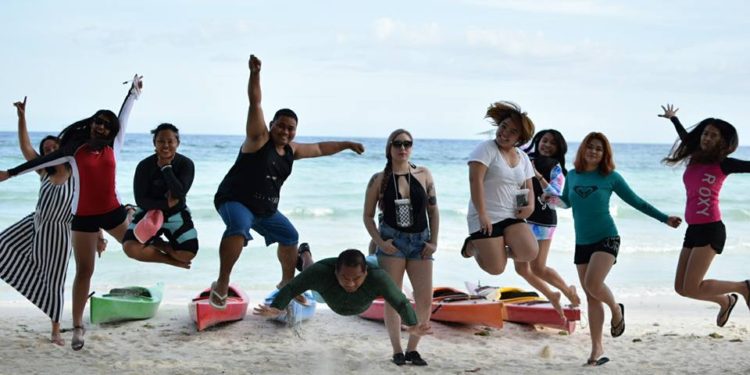 If you have known me for awhile, you might already know that I have a phobia with sea water… or any body of deep water in general. The depth terrifies me, that is why I prefer adventures involving mountains instead.

But despite how terrified I am with the deep blue sea, I also have a slight streak of daredevil DNA in me, that’s why sometimes, I force myself to face my fear of the depths in exchange of an awesome experience.

Well, that did happen during our Seas The Day Bohol Tour when my friends from Cebu Blogging Community and I went sea kayaking at Dumaluan Beach Resort in Panglao, Bohol. We were privileged to do this activity with Bohol Paddler’s Association.

Several meetings after, led by their elected president, Dr. Theodore Dumaluan, a core group was organized and envisioned Bohol to be the Paddling Capital of the Philippines. They also aim to promote environmental awareness, physical fitness, and help boost the local tourism industry.

Over time, regular teams were formed and dragon boats were made.

In 2013, they organization became a big help after the 7.2 magnitude earthquake that shook Bohol. For a week, the dragon boats served as free carriages for transporting people as well as hundreds of relief goods from various organizations, and even caskets containing the remains of our fellow Boholanos who died during the calamity.

At present, the Bohol Paddler’s Association continues to reach out to the Boholano public to join this water sport that has already captured the interests of the public.

the calm before the storm.. errr.. before we faced the mighty waves. 😀

First and foremost, we were taught how to properly paddle first. We were taught which way the blade should face when facing the waves as well as where the weight of our body should be once we start kayaking. Sounds pretty easy right?

Hell no. The moment we started to paddle our kayaks towards the sea, we forgot everything we just learned. In fact, I was too weak and inexperienced, I was literally set off at the opposite direction where my friends were.

I was beginning to panic because I was clearly separated from my friends. I was paddling like crazy, but whilst doing so, I was also laughing with my situation. The waves were pretty intense that day so my tedious paddling does nothing for me to move forward.

But with my determination and sheer luck, I was able to go against the current and paddled towards my also struggling friends!

I was proud of myself to put a brave face on and continued paddling even though my arms and butt was literally burning. Hah! And I was proud because I was not thrown off the kayak despite everything. I absolutely would love to do it again!

Thank you Dumaluan Beach Resort and Bohol Paddler’s Association for letting me experience sea kayaking in the beautiful waters of Panglao!

I will be posting more pictures soon. 😀

Disclosure: Bohol Paddler’s Association is one of our sponsors during the Seas The Day Bohol Tour. All thoughts & opinions expressed in this post are solely my own and do not express the sponsor’s views or opinions.