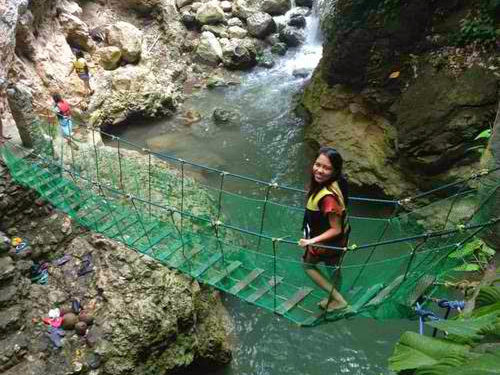 A friend invited me to go with her for a quick adventure trip to Esoy Hot Spring. It’s a hot spring located in Catmon, Cebu. This province is in the northern part of Cebu island and is approximately a 2-hour ride from Cebu City.

On the way to Esoy hot spring

We rode a van bound for Catmon early in the morning because it was Easter Sunday. We might not get a ride in going there if we will not start the trip early.  A week before the trip, I didn’t research anything about the place that’s why I was totally spell-bound when we arrived. I was captivated by the mountains and the road along the way. The Hot Spring is located approximately 5 kilometers from the highway.

To go there, you need to ride a habal-habal but since we rented a van for ourselves, we were brought directly to Esoy Hot Spring’s entrance. When we arrived, we came across another group who booked for that day as well. We then signed a waiver so we can proceed in going to the main site.

You’ll have to trek down to about a hundred steps to reach the hot spring.

The start of an adventure

We decided to go down to the river first. To do so, you’ll have to cross a hanging bridge before you can reach the river below. It wasn’t terrifying for me since it was like 5 meters only and there’s water below so if ever I fall down, I just have to swim to save myself. 😀

Before we went trekking, my friends and I decided to jump off to the river. It was a shitty jump for me because I didn’t cover my nose so when I submerged from the water, there was a sharp tingling feeling inside my nose and it took me a couple of seconds to recover. And I just learned today that the water there has sulfur because… well, it’s a hot spring. The water actually smells quite of smoke.

After that, we then started the river trekking. If you’re standing beside the hanging bridge, you will only see this side of the river where there are big rocks and mini waterfalls that’s why I thought, “Oh, the trek would be an easy one.” But hey, it was not. You see, there were actually more and bigger rocks behind that. I thought that we would only have splashes of water in our feet but I was wrong again.

You’ll have to go into the water and swim as well to continue. And oh boy, it wasn’t that easy because the end of the trek would actually lead you to Caningo falls. So basically, we were swimming against the current. It was then that I realized the importance of the life jacket.

Then, we finally reached Caningo falls. I thought that it would be the end of the adventure but then, I was wrong again. You can actually climb on to the top of the falls if you will go mountain trekking. Naturally, my adventuresome mind kicked in so my friends and I decided to climb the mountain. It was a risky one because you’ll have to climb barefoot and with your bare hands because there were no straps and fittings.

The path is also slimy so you’ll have to be wary on what you’re stepping at and holding. You only have the rocks and roots to hold on to. I even got leg cramps while we were climbing. Anyway, we reached the end of the path and eventually we were at the top of the falls. And I had no idea at first that to return to the base, you actually have to jump off the waterfalls or else you’ll have to go back to the path where you’ve gone which is totally impossible. So we had no other choice but to jump off the waterfalls.

It was a real terrifying step for me.

Not only was it my first time to jump off a waterfall, but I also had no idea how deep the water was and what would await me when I submerge. We were all hesitant to dive. There was a guide with us and he said that we have to stop looking at the water because it will only terrify us more. When it was already my turn to jump and hell, it was cul-de-sac rocking.

My knees suddenly got wobbly and my heart seems to be in my mouth. After my first three attempts, I did finally jump off and the feeling was actually AWESOME. It was like surviving a plane crash. Oh, I haven’t been in a plane crash. What I meant is it was like earning the highest achievement award. So cool. But I’m not sure if I want to do it again. (laughs)

After that, we stayed at the mini-falls for a while to take some pictures.

We went home after that with no regrets. Well, we had muscle pains and a few scratches but the smiles on our faces in Esoy hot spring were priceless.