Why The Typhoon Made My Stay in Nagsasa Cove More Special 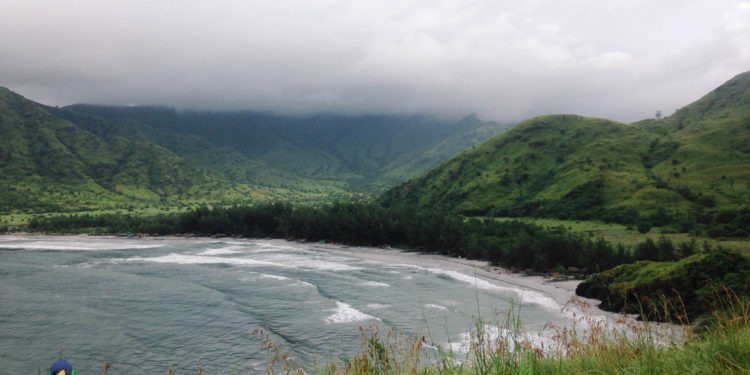 It was not my first time to travel in the midst of a typhoon.  Three years ago, I went island hopping in El Nido despite Typhoon Quedan. It was a bad decision and I definitely don’t want to do it again. The difference now is that my friends and I thought that the typhoon already left the country when we got into a boat from Pundaquit proper to Nagsasa Cove.

Moments after we set out to the sea, it started raining hard and the wind was howling like crazy. Gigantic waves thrashed our tiny boat up and down. It was a scary experience. More scary for me because I have a serious case of thalassophobia or an intense and persistent fear of the sea.  Mind you, the color of the sea in Zambales is dark, murky green due to lahar when Mount Pinatubo erupted in 1991.

After what seemed like years of waiting, we finally arrived at the foggy, but breathtaking shores of Nagsasa Cove. But we had to immediately find a cottage first to place our stuff and pitch our tent. Our boatman did not stay with us so we were basically left to our own devices. It was so quiet as there were only a few of us on the island, though several mountaineers arrived in the evening from a 12-hour trek from Subic.

We decided to cook for lunch first before we’d proceed to wander around the cove. We bought fish, vegetables, eggs, and kakanin before we went to Nagsasa Cove since there are no stores there that sell meals.  I decided to cook tinolang isda for lunch to warm our cold bodies.

The rain stopped and we thought we can finally enjoy the view in Nagsasa Cove. We decided to first visit this famous waterfalls our guide was talking about. Thirty minutes after our trek, it started raining again. We had to go back because we cannot cross the river. Everyone has to cross this river to reach the waterfalls.

We decided to visit a smaller waterfall instead, which is located in the eastern part of the cove where several Aeta families live. Sadly, the waterfalls were murky because of the rain so we only took pictures and left.

It wasn’t all disheartening though. I had fun while walking in the rain. I walked barefoot, played in the lahar-covered grasslands, and listened to our Aeta guide talk about his experiences when Mount Pinatubo erupted.

We also went to this spot where the beautiful creek meets the sea. There we met a rather curious friend named Choi-Choi. He was the pet of one of the local fishermen and was busy wandering around while his master was looking for fish in the sea. While my friends and I were enjoying the view, this cute dog swam from the other side of the creek to us. He was interested in our kakanin and kept giving us this pitiful look. We wanted to give him our snacks, but decided not to, because we were not sure if rice cakes are good for dogs. We petted him instead and we ended up having a good laugh doing so. You see, the dog is well-trained and can understand Tagalog!

Night came and it was still raining cats and dogs. I prepared inihaw na bangus for dinner. After that, we used our remaining fire to melt marshmallows for some yummy s’mores.

When we got into our tents, I prayed for the rain to stop so we can climb up the hill the next morning to see the view. It was still raining hard the next morning. Our boatman was going to fetch us back to Pundaquit proper in less than 2 hours and there was still no sign of clearing. I almost gave up and thought that I would never have the chance to see the view. But unbelievably enough, it’s as if the rain suddenly came to a halt and the fog melted away. We immediately climbed the hill to see this famous spot we had only seen in pictures before.

The whole ordeal was so stressful that my friend, Charlyn, almost wanted to cry because she was so happy we made it! Hahaha. The view was breathtaking, it was like being inside a Bob Ross painting. I’ve never seen such unadulterated beauty in my life.

Just like the picturesque landscape of the lahar trails in Tarlac, this beauty was also a result of that fateful Mount Pinatubo eruption.

We ended up taking lots of pictures and videos to reward ourselves. I have to admit; our overnight stay was a stressful waiting game.

We were supposed to go to Anawangin Cove and Capones island after that, but the gigantic waves prevented us from doing so. Our boat simply cannot handle the waves and our boatman said they are going to have a hard time docking the boat. It was fine with me though because Anawangin Cove is only a smaller version of Nagsasa Cove. According to our guide, Nagsasa Cove is more pristine and less crowded than Anawangin Cove.

Our trip was a beautiful misadventure and I wouldn’t change a thing. Even though it seemed like the forces of nature was against us, we still found a way to enjoy. The typhoon made that trip more adventurous and special to me. I got to experience cooking for my friends and had a lot of ‘firsts’ on that trip. I had to face my fear of the depths once again and trusted the Universe whatever it decided for me.