Johanna Marie Frejoles Leave a Comment on Crash Landing in Oslob: The Story of My First Paragliding Experience

I never thought that my first paragliding experience would actually lead to an actual ‘crash’. Not to worry – there was no harm done. No injuries at all. It was purely an accident which thankfully, only threw me and my pilot in shock for a few seconds.

But let’s get into that part later.

A bit of backstory

Way back before the famous Korean series, Crash Landing on You, became a worldwide sensation, I was already interested in paragliding. When I first went to South Cotabato in 2017, I came across a post about SOX Paragliding Adventure. I was curious about the process of paragliding and how it all works. It got to a point where I even wanted to enroll in their Basic Paragliding Course. But at that time, I was traveling for other reasons. And let’s be honest; paragliding is an expensive sport. I knew that it was something that I would really enjoy, but not when my pockets are as empty as my soul.

It was only when I came across a post about Oslob paragliding this year that my interest in paragliding got rejuvenated. I didn’t even know there’s a place in Cebu that offers paragliding experiences. I immediately told my friends about it, and after weeks of contemplation, whether we should do it or not, we finally traveled to Oslob to experience paragliding.

Oslob Cebu Paragliding Development (OCPD) is the only paragliding facility in Cebu. The takeoff site is located 15 minutes away from Oslob proper. At the moment, they offer solo paragliding (open only to licensed paragliding pilots local and international) and tandem paragliding. Recently, I learned that they also offer training and certifications to be a certified paragliding pilot.

If you have no plans of flying and you just want to chill in the takeoff site, they also have a beautiful camping site and hammock area. 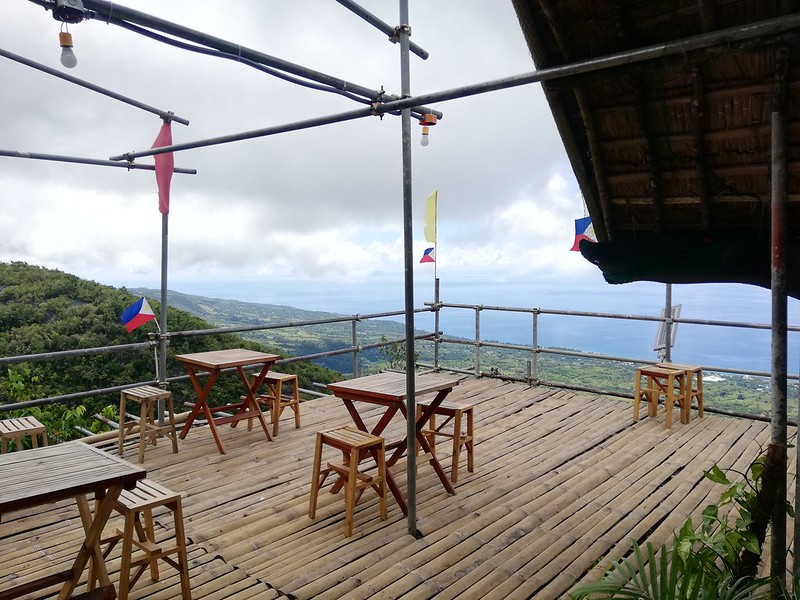 Or you can simply enjoy a cup of coffee on the roof deck and just watch the paragliders in flight.

I love heights and I’m not afraid of flying so I would say that I was absolutely excited about the whole experience. If only I have a license, I bet I’d be even do a solo flight. I guess, I better start saving up for that.

Also read: What It’s Like to Fly in a Gyrocopter

I was partnered with one of the pilots, Kyle. He’s from South Cotabato and was only visiting Cebu at that time. Fun fact, he is the youngest paraglider pilot in the Philippines. I’m not sure if he still is right now, but he was featured on TV many years ago as the youngest paragliding pilot in the country. I didn’t know it when I did my paragliding adventure. It was only when a friend saw my Instagram picture many days later and sent me a DM telling me, “Did you know that Kyle started paragliding when he was like 14 or 15 and that he is this blah-blah-blah?”

How cool is that? Which then made me go back in time and try to remember…

What the hell was I doing at that age?

Anyway, we proceeded to the takeoff site and we got ready for the flight. In all honesty, there’s not much preparation required on your end. The pilots do all the work, and all you have to do is listen to their instructions carefully. Kyle strapped me to him and when everything was all set, he just said, “Run, run, run!” To which I did with no hesitation, and then we just took off. 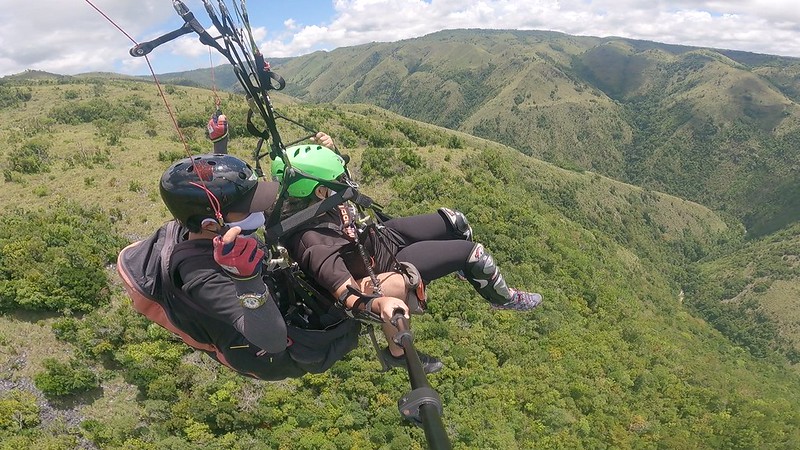 I have a naturally calm demeanor. It’s almost impossible to scare me. But when I felt the adrenaline rush at that moment, for a second, my heart skipped a beat! Ah, it was such a great feeling.

They say that you should avoid directly looking down to not get dizzy but I just couldn’t help it. I looked at the view! It was absolutely magnificent! 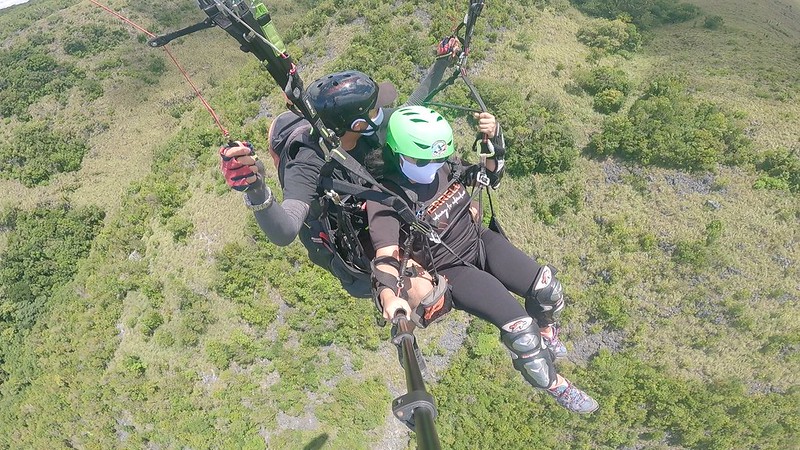 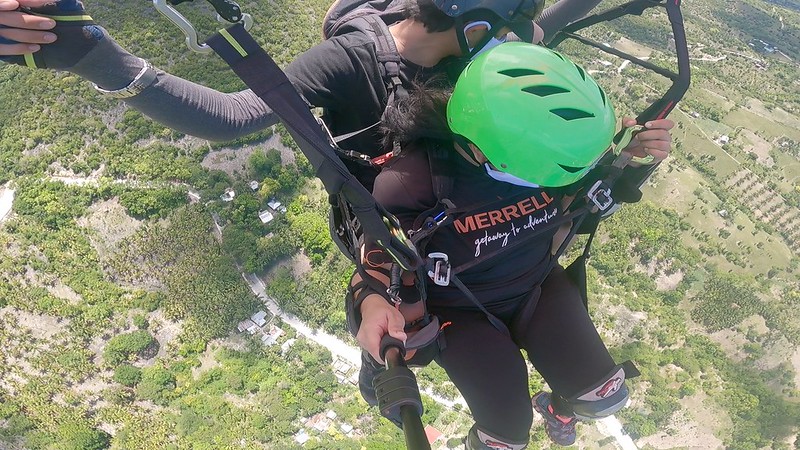 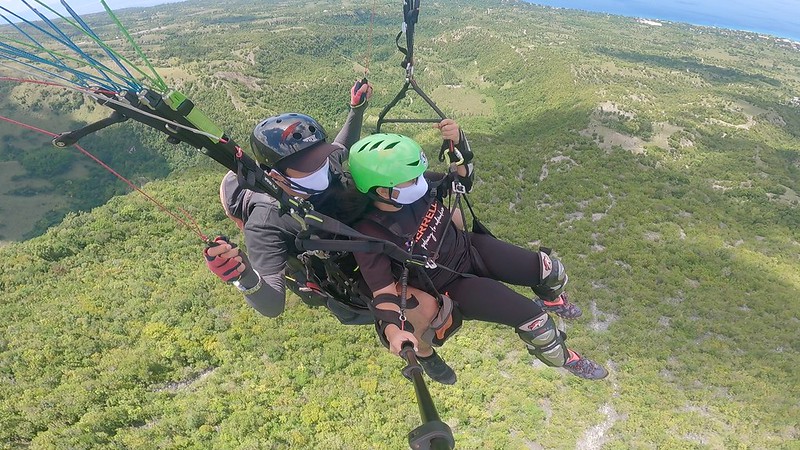 Kyle was telling me how high we were, but I wasn’t actually listening. I was busy looking at the spectacular view and enjoying the experience. He was a very skilled pilot, and I’m glad that I didn’t feel any panic or fear at all.

He did a few maneuvers to which I can no longer remember. All I could think of at that moment was how free and amazing the experience was. That’s probably the reason why I enjoyed every single second of the paragliding experience. 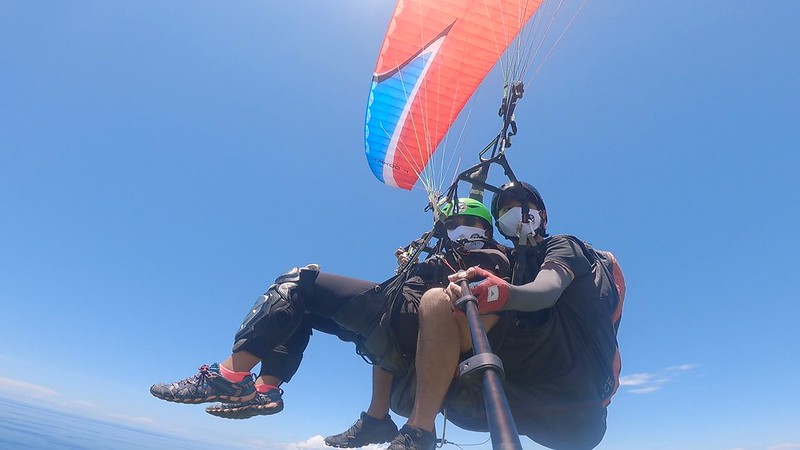 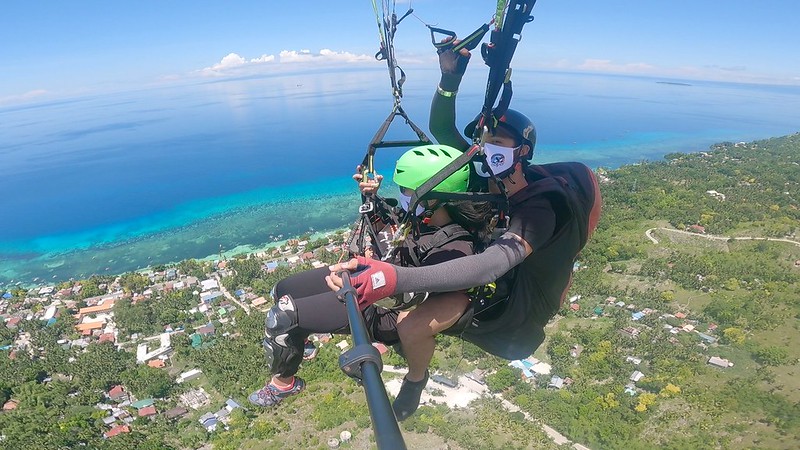 The entire flight took about 15 minutes, and it may sound too short, but up there, it felt like we were flying for hours. Tandem flights usually take around 8 to 15 minutes, depending on the wind conditions. Luckily, that day, the weather was perfect.

The most hilarious landing ever

As we were getting ready to land, I saw the landing site getting closer and closer. Kyle gave clear instructions on what to do so I did exactly what he told me. The whole flight was such a breeze that you wouldn’t think that landing is an entirely different story.

None of us saw that there was a rock the size of a coconut shell covered in the grass at the landing site. As soon as we hit the ground, our butts hit it and we were thrown forward. I guess you could say that it was just like landing in sand, but with an added bit of pain because of the rock. The impact was so strong that it caused us to slide and roll down a bit.

The shock was instantaneous, I didn’t get to speak for a few seconds until Kyle shook me and asked me if I was alright.

Luckily, we were both alright. I didn’t get any injuries, scratches, or bruises. And most importantly, the rock didn’t cut our pants and exposed our bare ass! Boy, it would have been another story to tell.

We were laughing away though, because of the most hilarious landing ever. It was indeed a Crash Landing in Oslob. The adrenaline rush was so great that I would definitely do it again!

Unfortunately, my video footage of the crash got corrupted. Luckily, I have 7 minutes of amazing footage saved so, it’s still good.

My friends and I had a lot of fun that day. We were all satisfied with the service that we got from OCPD, and I truly recommend them to anyone who wants a truly amazing paragliding experience.

Thank you, Kyle, and to the entire OCPD staff, for making my first paragliding experience the most memorable.