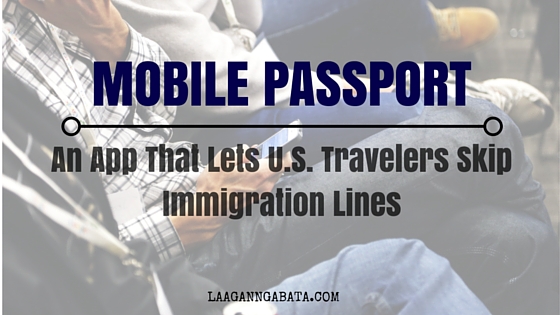 Getting through immigration is such a hassle to travelers – especially in the Philippines. Mostly because, the queue is long and worse, almost every immigration process in the booth is still done manually. It’s as if we are still in the olden times when typewriters ruled the offices.
But if you are traveling to the U.S, there is already a travel app that lets you go through the immigration lines faster! It is called Mobile Passport Control – an app that enables travelers to access express immigration lanes at participating airports.
All you have to do is download the app, and upon landing, use it to fill out a customs form and submit a selfie to set up a profile with your passport data. The app will then generate a QR code which will be scanned by the customs personnel at the airport.
The best part is; Mobile Passport Control app is free and doesn’t require an interview prior to using it. Please note though that the app will not allow users to completely skip customs lines, but rather, speeds up the process for their entry to the US.

According to John Wagner, an employee of the U.S Customs & Border Control, “Think of it like a toll booth. Global Entry is your E-Z Pass lane; this is your exact change lane.”There are about 190 million smartphone users in the U.S alone, and the number of people using smartphones worldwide is enough to convince software developers to keep creating apps that will make traveling more efficient. According to Gaming Realms, a software company that provides recreational games online, said that the increased adoption of smartphones by consumes living in the U.S and the rest of the world can be attributed to device’s increased Internet capabilities.
Prior to the app’s launch, U.S airports were faced with various complaints from passengers. Initially, a system called Global Entry, which allows pre-screened travelers to check in at the kiosks, was implemented to mitigate the long queues. But with the Mobile Passport Control app, over 30 U.S airports can now expedite passenger’s entry process.

Hopefully, an app like this can be implemented in the Philippines as well so that millions of tourists and locals can save a lot of effort and time when traveling.