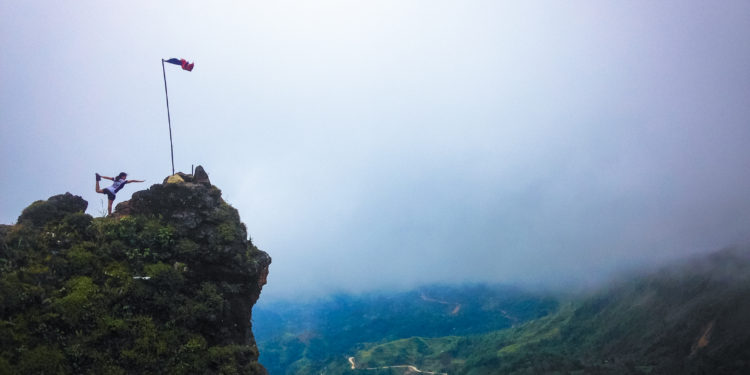 I have always been proud of my strong knees and calves. That sounds so weird. But yes, I am proud of them because I’ve never had any problems every time I trek mountains. So when my high school friends and I initially planned our trek to this towering monolith called Candongao or Kandungaw  Peak, I was pretty confident.

Weeks (or was it months? :P) prior to our trip, I asked one of my blogger friends, John of Four-eyed Laagan, how difficult the trail is. He said that it won’t actually take that long to reach the summit, but the trail going up is pretty difficult it could destroy your knees. Sa Bisaya pa, makaguba’g tuhod nga agihanan.

Anyway, we initially wanted to do it the first week of 2017, but my friends and I were already too excited, considering most of us have not seen each other since we graduated high school, that is why we decided to finally go to Kandungaw Peak before 2016 ends.

I was in Santander that day, and all of them are in the city, so we decided to just meet in Dalaguete. It was my first time to travel alone in the wee hours of dawn. Kandungaw Peak is located in the highlands of Badian, but can be readily accessible from the town of Dalaguete, Cebu.

Somehow, I can actually say that it was a knee-bursting, back breaking trek. Trekkers going up to Kandungaw Peak will have to pass these stairs which is probably the most ruthless stairs I’ve ever been to. This is why whenever I am in a new mountain, I prefer to trek on rough ground rather than flat ones. The latter just seems to be more difficult.

I didn’t mind the pain too much. I was too adamant to reach the summit, no matter what.

Unlike most of the pictures I have seen, I was more amazed of our experience because we started our trek at dawn, which means it was still so foggy with almost zero visibility in some areas. The vibe was so mystical, it was as if my friends and I were entering a different world.

We decided to start our trek to Kandungaw Peak in these hours because we wanted to see if we can capture the sea of clouds. Funnily enough, the Universe played a joke on us, and gave us an awesome view of the sea of fog instead. Haha!

The summit can be easily reached in less than an hour if you are a fast trekker. But whatever your pace is, you can definitely finish the whole trek in about an hour or so. My friends and I were pretty fast because we were too excited to reach the summit. However, when we reached the summit, we were met with rain showers and thick fog. We had to wait for about 4 hours in order to see the view from the top.

But the wait is truly worth it. We were screaming on top of our lungs when the fog started to fade away. We sounded like to-be-slaughtered pigs asking for freedom! The amazing view that Kandungaw Peak offers is as amazing as the view of the nearby mountain – Osmena Peak.

But what makes Kandungaw Peak a unique destination for mountain enthusiasts is its majestic monolith. Thou shall not leave this mountain without you having at least taking a picture of this nature-crafted monolith! It was what I have been wanting to see in person, right after I saw dozens of pictures floating on Instagram. I simply had to see this place myself.

Right after the fog lifted, I asked my friends to take a picture of me. I even attempted to do the Lord of the Dance yoga pose to add more drama. #PangInstagram. Haha!

It was one memorable climb and I am definitely looking forward to more climbs with my high school friends!

The easiest way to reach Kandungaw Peak is through the town of Dalaguete. From Cebu City, ride a Bato-Oslob bus at the Cebu South Bus Terminal, and ask the driver to drop you off at 7-Eleven Dalaguete. From there, you can ask habal-habal drivers to take you to the drop-off point at Brgy. Maloray. Fare is 150 pesos, one way. Alternatively, you can also ride a bus heading directly to Mantalongon Market. From there, you can simply ride another motorcycle going to Brgy. Maloray.

If your entry point is through Badian, ride a Bato-Barili bus at the Cebu South Bus Terminal, and ask the driver to drop you off at Badian. Ride a habal-habal to Sohoton Elementary School. I personally haven’t tried this option yet, so I would highly suggest calling their municipal office and ask for credible guides.

My New Year’s Resolution And Why I ...