Johanna Marie Frejoles Leave a Comment on Jomblang Cave: Beauty Underneath a Sinkhole

I should take as many pictures as I can. That’s what I was thinking inside the car when our driver picked us up from our Airbnb. It was our last day in Yogyakarta and we wanted to do one more activity before we can officially end our 2-week adventure from West Java to East Java. We decided to explore Jomblang Cave in Gunungkidul Regency.

Jomblang Cave or locally known as Goa Jomblang is one of the natural wonders that I really wanted to visit in Yogyakarta. But when I finally arrived there, I forgot every plan that I originally had in mind. Instead, I just stared at the magnificent view in front of me.

What sets Jomblang cave apart from others is its interesting form. As soon as the light touches the mouth of the cave, it forms a cascade of lights that resembles that of a waterfall.

Getting to Jomblang Cave

I found out that it’s hard to DIY this tour. Months before I went to Indonesia, I tried looking for a blog that can tell me how to get there without a tour. However, I learned later on that while there are others who were successful to do it, it is still advisable to book for an organized tour.

One of the reasons is the management only allows 75-80 people per day. It even used to be just 25 people. Another reason is you are literally chasing the time with this said activity. You need to be at Jomblang Cave by 9:45 in the morning to be able to witness the cascade of lights.

I booked my Jomblang Cave tour on Klook and it is by far one of the best decisions I’ve made. They made everything super easy for my friend and I. The package already includes all the fees, gears, transportation, and even lunch. All you really need to do is show up.

Into a big sinkhole

The sinkhole is ginormous. I can’t even describe its size. I even looked it up on Google Maps and it looks terrifying from above.

Looking down, I realized immediately how deep it is. At the bottom, you will see rich vegetation that covers the entire area. 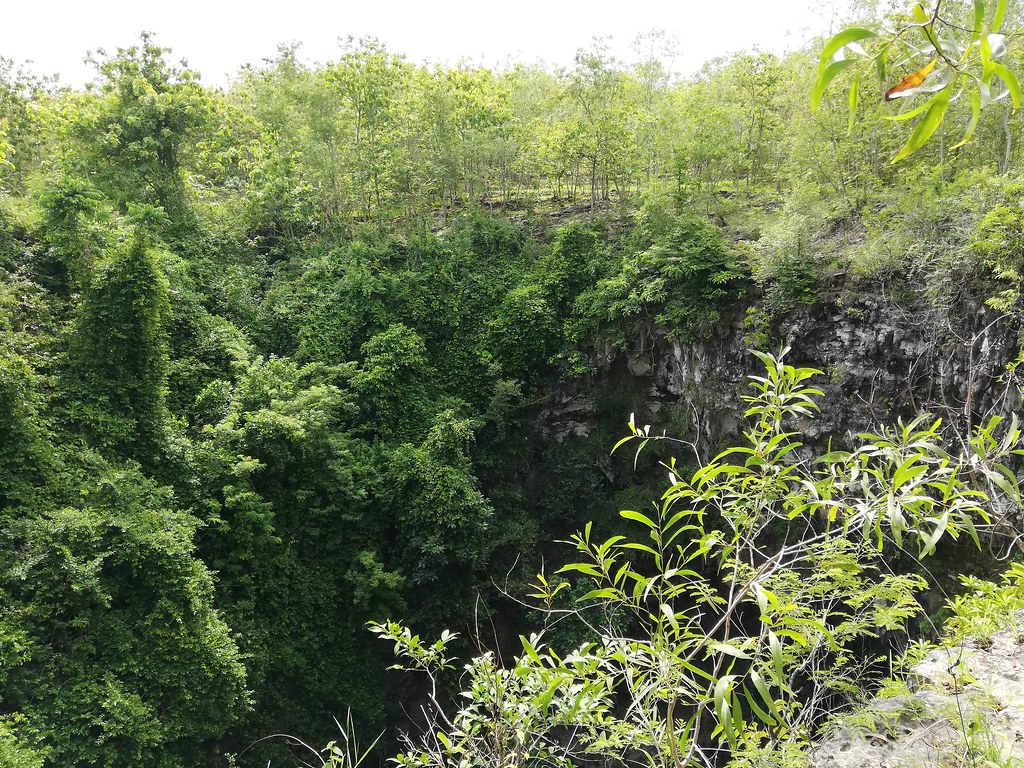 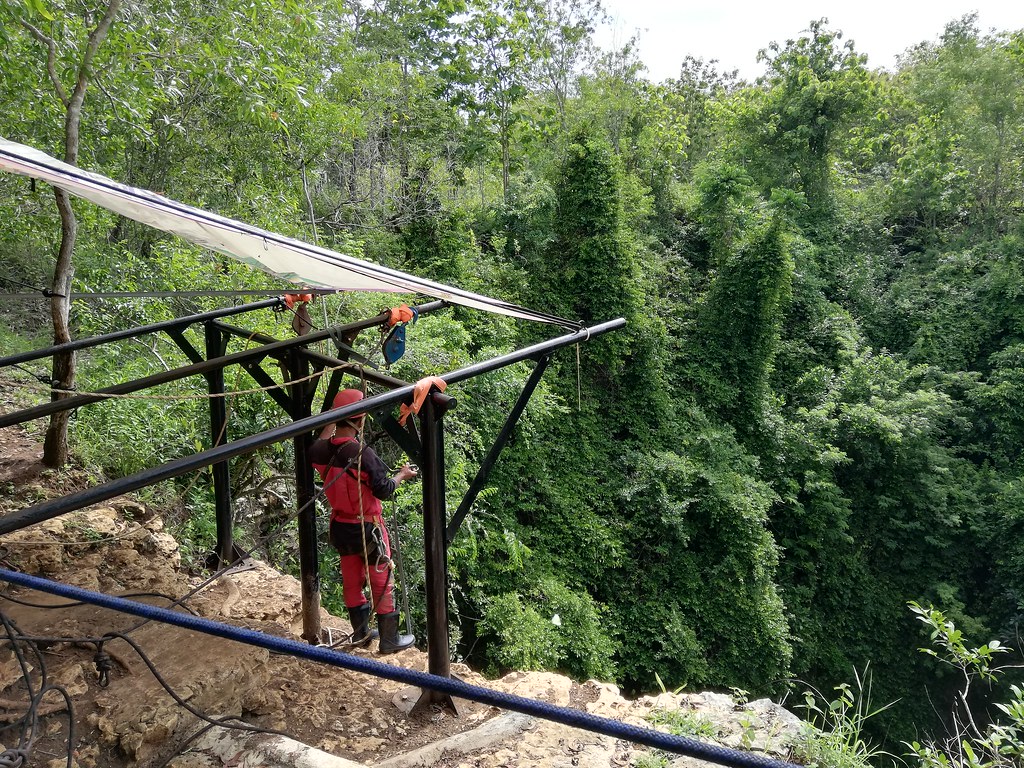 We got ourselves strapped properly with safety equipment before getting to the edge of the sinkhole. I was very excited because it’s been a while since I’ve gone caving. I miss the feeling of abseiling which is probably why I didn’t feel nervous at all. 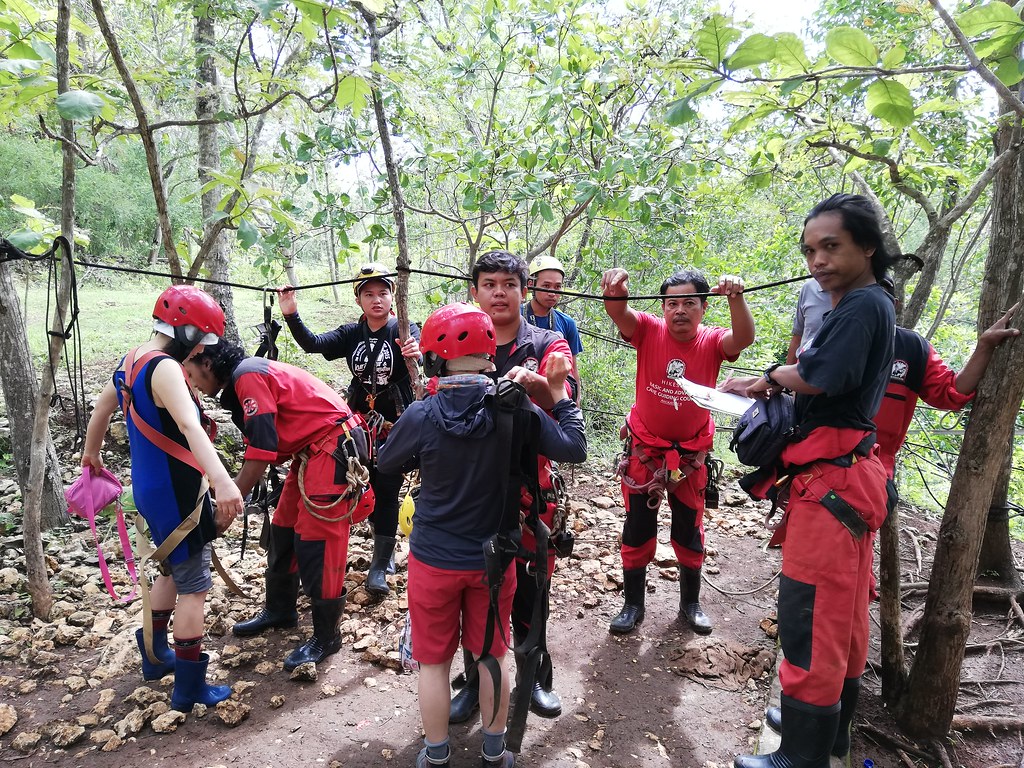 In fact, I enjoyed the abseiling part more than the caving itself. It was my first time to abseil at that height. Moreover, I’ve never done it before in a sinkhole. So it was really an adrenaline-pumping experience for me. 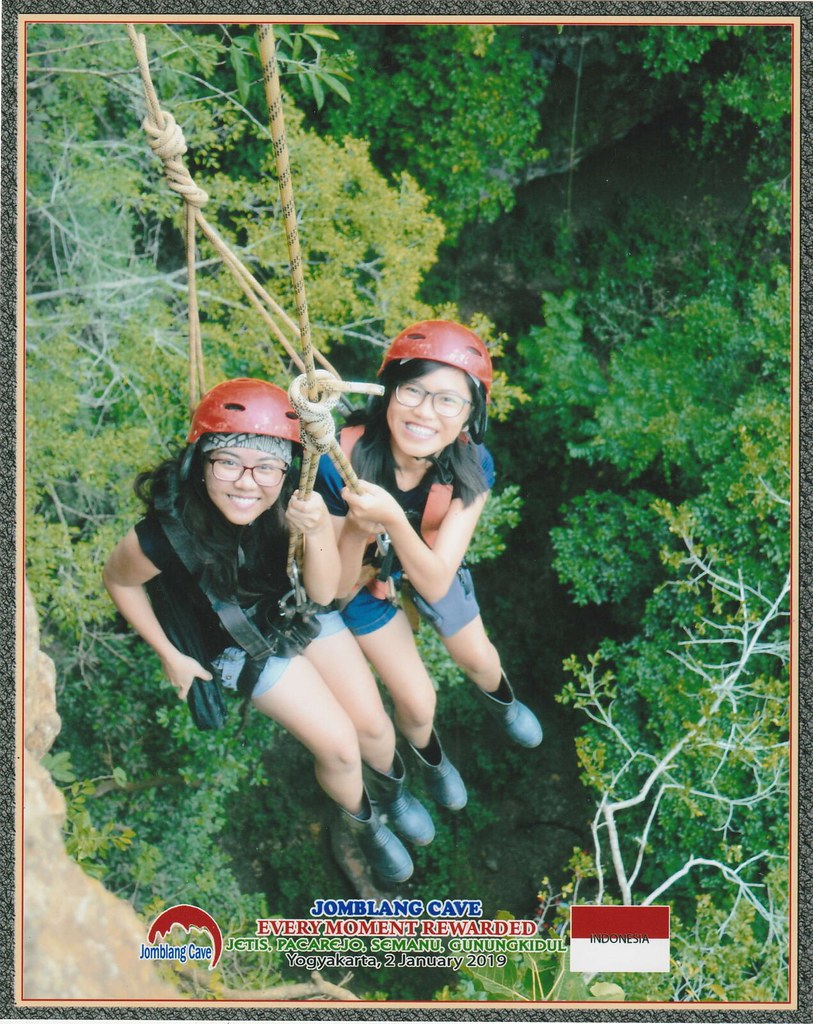 Our guide said that it was a 63-meter drop all the way down to the bottom of the sinkhole. Once we arrived at the bottom, we walked a few more minutes down to the actual entrance of the cave. 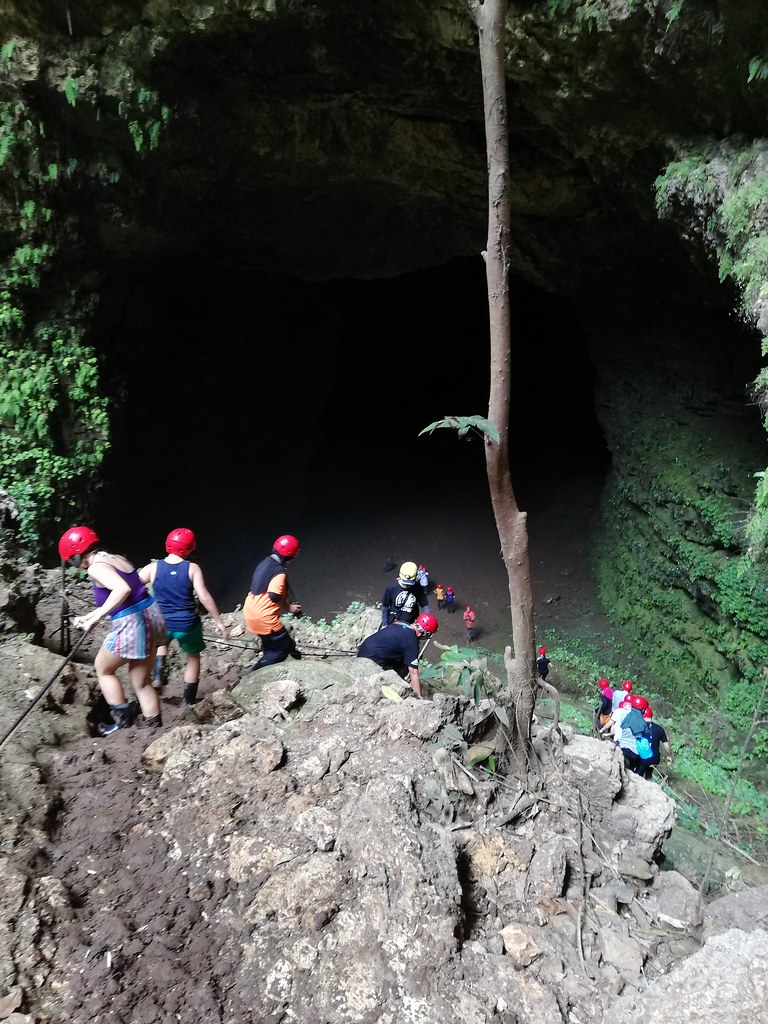 The tunnel is dark, muddy, and wet. You need to be very careful in this part because it gets very slippery. The tunnel is about 250 meters long and dark. You will be provided a torch so you need not worry about a light source. 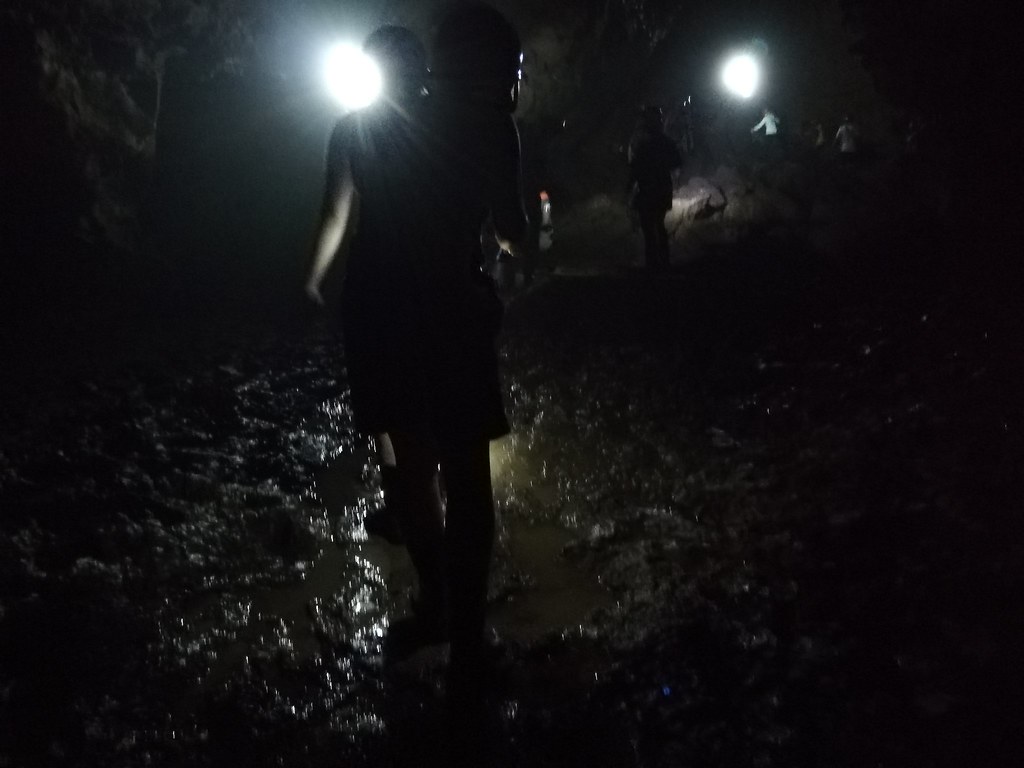 The central cave itself is called Goa Grubug. As soon as you reach the end of the tunnel, you will immediately see the view of what they call the ‘Light of Heaven’. When the rays of sunlight touch the roof of the cave, you will instantly witness a cascade of lights that resembles a waterfall.

It is absolutely breathtaking! As soon as this happens, you will see how large the cave is. You will also see a small underground river.

Depending on the weather, there may be times where the light is not as bright inside the cave. This is why it important that you have to be there as early as possible. You will have to be there around 10 in the morning when the sun’s rays are at their strongest. 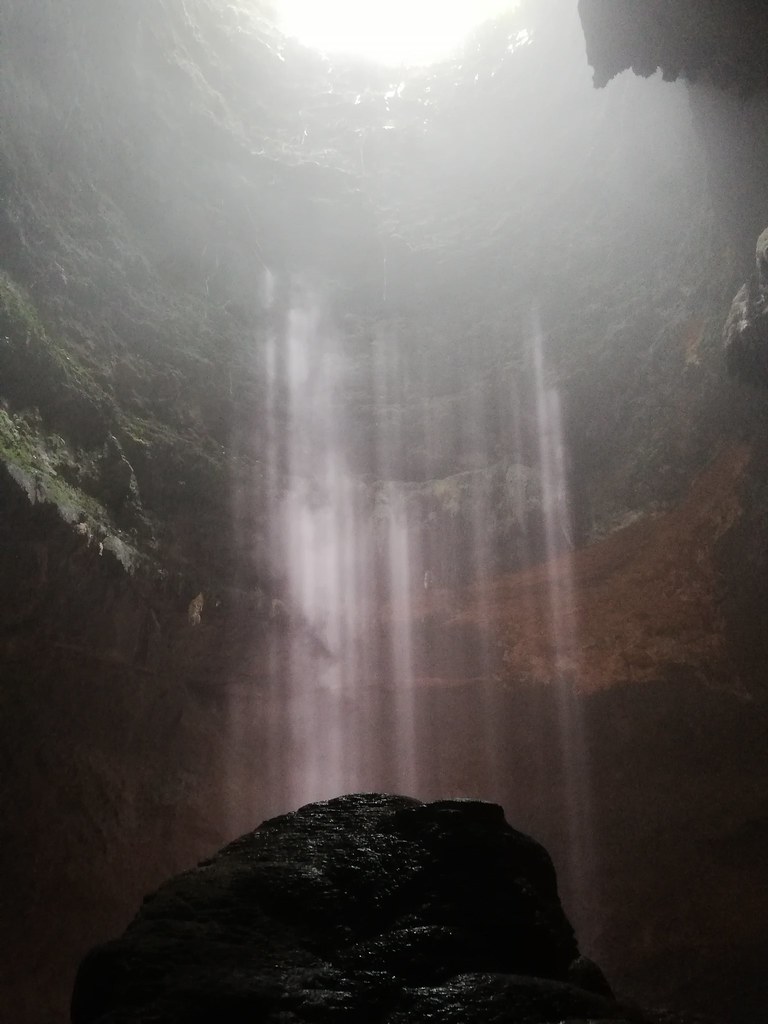 One must also be very quick if you are taking pictures because as soon as the rays of the sun are blocked by the clouds, the cascade of lights will also dissipate. You will have to wait again if you need more time to capture the view.

It was a thrilling waiting game. I didn’t even think of capturing more photos and videos because I simply enjoyed watching the natural phenomenon in front of me.

Jomblang Cave is worth visiting.

If you ever find yourself in Yogyakarta, don’t miss out on this one. It’s a thrilling adventure you would want to experience. Especially if you want to explore places beyond the usual tourist destinations in the area.

Underneath the bustling city of Yogyakarta, Jomblang Cave is a magnificent wonder you should add in your list if you ever find yourself in Indonesia.