Downstream Canyoneering Adventure in Alegria to Kawasan Falls in Badian 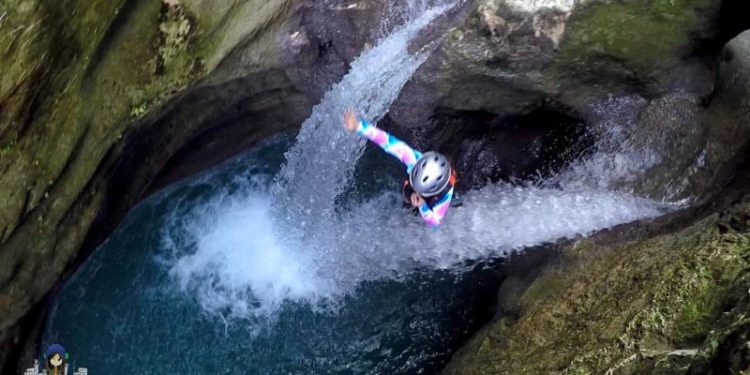 Updated travel guide for Badian Canyoneering can be found here.

I promised myself two years ago that I would travel around Cebu more. There’s just so much beauty in my home island that needs to be acknowledged. Come to think of it; we have almost everything here. Majestic waterfalls, stunning beaches, imposing mountains, just to name a few.Two weeks ago, I had a spontaneous canyoneering adventure with my sister, her partner, and my aunt. It was one of the most exhilarating adventures I have ever had in my entire life. Talk about wobbling knees and heart-stopping jumps. I was literally shaking all over.

Canyoneering or Canyoning, by the way, is a sport activity that involves travelling down creeks or streams within a canyon by a variety of means including walking, crawling, swimming, climbing, and abseiling.

The first jump is one of the highest which is 15 ft. But we opted for another spot which is just 10 ft because, heck, I was too scared.

I was scared because I already knew what to expect because it was not my first time to jump off a falls. I already had experience jumping off the 30 ft. tall Caningo Falls in Catmon, Cebu. I already knew the feeling…

My first jump was a shitty one though. I ended up jumping at the center where the water falls. One of our guides had to grab me because I was struggling to get out. What a way to start an adventure, Hanna…

But the series of jumps and slides is going to get a lot easier after the first jump. You just need to conquer your fear in the first one since it is one of the highest.

We rested inside a mini cave after our first slide 😀

I love that the canyons look a bit dark and jungle-like. The sight of entangled trees with wet, muddy leaves was oddly invigorating. That is probably the reason why Tarzan is strong and mighty… Hah!

Most of our photos were blurry due to unsteady hands, paddling in the water. You’ll really have to stay put, to get a good shot of the view.

After what seems like hours of swimming, jumping, sliding, we arrived at a spot where barbecue is sold! How awesome is that!?! Barbecue in the middle of the canyons. They actually have to use ropes and climb down the roots to bring these barbecues. So please, do pay these ladies after eating. They recounted countless times when tourists would eat barbecue and then immediately jump to the water to avoid paying. That’s a big no no. Please be a good person and pay your dues.

One of the highest jumps is located just in front of the barbecue stalls. It’s about 25 or 30 ft. tall and is optional. There’s another path if you choose not to. I did not jump in this part anymore because a) My stomach was too full. b) Letter A is just an excuse. Truth is, I did not want to scare myself by jumping once more when I know there is another option. The next time, perhaps. Ha-ha.

My favorite spot is the cave nearing the end of the canyoneering area. The frosted mint-colored water sparkles in this part of the lagoon despite being covered from sunlight.

We had to trek a few more kilometers until we reached the third level of Kawasan Falls.

Finally, lunch at Kawasan Falls! We did not do the last jump at the 2nd level of Kawasan Falls (35 ft.) for obvious reasons. Ha-ha.

I would like to thank Ralph, our guide, who was so patient during our scaredy-cat moments. If you ever get to read this Ralph, high five!

Mobile Passport: An App That Lets US ...