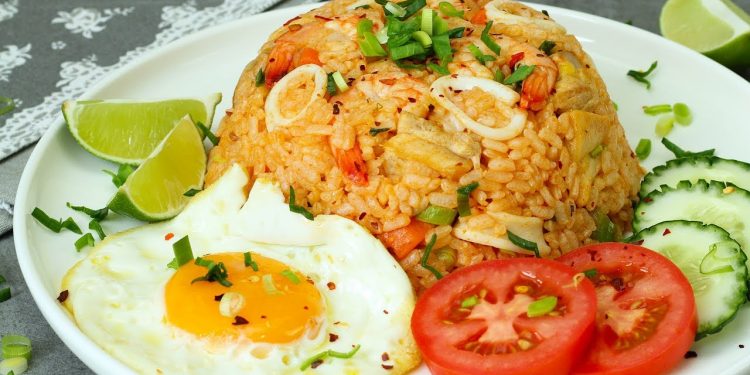 I recently watched a Youtube video of Uncle Roger reacting to Gordon Ramsay cooking a Nasi Goreng – an Indonesian version of fried rice. If you don’t know who Uncle Roger is, then you haven’t been online for the past couple of months. Good for you, but do google him when you have time. He is currently the hottest Asian uncle in town.

But I’m not gonna talk about him today. I’m going to talk about nasi goreng because his video reminded me of a funny story that I haven’t shared with anyone.

I was backpacking West Java to East Java with my friend for two weeks. Before the trip, I didn’t do a lot of research about Javanese food because I wanted to be surprised when I get there. The plan was to simply ask the locals what food we should try.

But for some reason, the universe decided to play a trick on us. You see, every time we wanted to eat something new, it just wasn’t available. The only thing that is available on the menu is nasi goreng.

It was sort of okay the first few days. Until four days had gone by and we noticed that nasi goreng is always the only thing available in every place that we visit. I’m not even kidding.

It’s not that nasi goreng tasted awful. On the contrary, I truly believe that Indonesia has the best fried rice in the world. (Fight me!) But I’m not a big rice eater. So it’s not the food I’d want to eat for the rest of my life. If you know what I mean.

Nasi Goreng and The Guy in Probolingo City

On our 5th day in Indonesia, we arrived in Probolingo City just after sunset. You have to remember, Indonesia is a predominantly Muslim country so most establishment closes when it is time for their evening prayers. The guesthouse didn’t have a restaurant and no store was open near it. The streets were also dark and sketchy. At this point, we were so hungry that I wasn’t even thinking about our safety anymore. lol

My friend and I had no choice but to walk and look around for food. We probably walked for a good 10 minutes when we saw a house with a mini bistro beside it. They were just about to reopen when we arrived. We were so happy because we thought we could finally eat something, but the guy who owned the place said they only serve drinks.

Our faces must have looked so desperate that the guy felt bad and offered to look for something. We declined and said we’ll just look for another place, but the guy insisted that we stay put in his bistro. He didn’t want us to walk all by ourselves because like I said, the street was so dark. He said, “It’s not good for you two girls to walk in the streets at night. Besides, I have a motorcycle so it will be a lot faster if I go.”

The fact that this random guy had to leave his bistro just to get us food, is still an embarrassing memory for me.

After a few minutes, he arrived with two bowls of steaming nasi goreng. “I’m sorry, but this is the only food available”, he said. We ate the nasi goreng until our stomachs were full. We had no right to complain.

The guy even offered to take us back to our guesthouse because he didn’t want us to walk by ourselves. He was so bothered that we had no male companions. To this day, I am still thankful for that guy’s overprotective attitude even though it wasn’t necessary. Sometimes, in life, you need that.

After that eventful night, I thought that it would be the last time I’d be eating a nasi goreng.

Nasi Goreng and The Old Couple in Magelang

The night before we were to visit Borobudur Temple, we booked ourselves in a guesthouse which is about 30 minutes away from the temple. The hotels near the temple were quite expensive so we settled in this guesthouse because it was nice and so cheap. It was only 80,000 IDR but we had a spacious room, clean toilet and shower area, and a terrace! The owner even gave us a handful of jambu semarang or watery rose apples.

The only downside is that the guesthouse doesn’t have its own restaurant. I wasn’t initially worried about it because I thought, “For sure, there’s a nearby restaurant here considering this is near a tourist spot.”

There was none. Not even a convenience store. It was still probably around 7 PM but the streets were already empty. We had to walk again to look for food. A few minutes of walking, we arrived in a dimly lit kiosk with a sign ‘Nasi Goreng 10,000’.

We muttered, “Oh no. Not again”

I never thought I’d reach a point in life where I’d actually hate rice. Well, hate is such a strong word, but you know what I mean. I was watching the plate of nasi goreng with utter disgust. But the worst of all, the old couple who were serving it gave us big portions, probably because we were tourists! We had no time to decline. And even if we did, we’d have a hard time telling them because of the language barrier. Had I known they’d serve us a platter of nasi goreng, I would have only ordered one.

The nasi goreng smelled so good, we can tell they put so much spices in it. But at this point, we were so done with rice. We literally had to force ourselves to take a bite. My friend, who is actually more of a rice eater than me, couldn’t even open her mouth. She looked like she wanted to cry.

We were laughing on the outside but crying on the inside because of our unfortunate situation. Still, we ended up eating half of the serving just so we won’t come off as rude customers. We didn’t want to hurt the old couple’s feelings especially that they were so accommodating.

My biggest takeaway from this trip was to not take life seriously and laugh at yourself when you have to. Sometimes, life will put you in unfortunate situations but you can make your situation better by simply laughing it off.

This trip also changed my attitude towards backpacking. It really pays off to research in advance, especially when it comes to food. I’m not a big planner when it comes to traveling, but after this trip, I made sure I’d only stay in hotels near restaurants and convenience stores.

This story didn’t have a bad ending. We got to explore the Javanese cuisine more after that unfortunate night in Magelang. We got to try so many food that I definitely would want to go back to Indonesia just for a food adventure.

This trip also made me realize how kind and accommodating the Indonesian people are. Despite it being ranked second as most dangerous place for women in Southeast Asia, Indonesia is one of the countries that I felt the safest. No one catcalled us and no one attempted to make us uncomfortable.

When this pandemic is over, and it’s safe to travel again, I would want to go back to Indonesia. To eat nasi goreng.

And a lot more! *winks

Everything You Need To Know About Shopping ...

5 Things to do in Cebu, Philippines